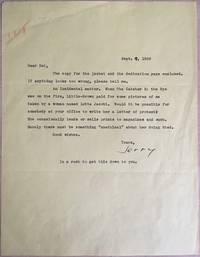 J.D. Salinger Typed Letter Signed mentions Catcher in the Rye, Franny and Zooey and comes with Hand Annotated and Unpublished Draft He created for the Dust Jacket of Raise High the Roofbeams, and Seymour

J.D. Salinger Typed Letter Signed mentions Catcher in the Rye, Franny and Zooey and comes with Hand Annotated and Unpublished Draft He created for the Dust Jacket of Raise High the Roofbeams, and Seymour

SALINGER, J.D. Typed Letter Signed "Jerry" with accompanying, unpublished draft for the dust jacket for Raise High the Roofbeams, Carpenter and Seymour: An Introduction. The draft was typed by Salinger and also includes a correction in his hand. Dated Sept. 9, 1962. Although Salinger was preparing for the publication of his final anthology about the Glass Family, he writes a letter to his agent mentioning The Catcher in the Rye: "When The Catcher in the Rye was on the fire, Little-Brown paid for some pictures of me taken by a woman named Lotte Jacobi..." The Lotte Jacobi photo was printed large across the back cover of the first two printings of The Catcher in the Rye. Salinger's fame exploded after publication, and he soon found he had become too recognizable to continue living in New York City with any semblance of privacy. By the third printing of Catcher, he had his image removed from the book jacket, yet he was pained by it his whole life, even going so far as asking his publishing house to writer her a letter of protest. Even today it remains the most well-known and commonly published image of Salinger, who eventually moved to rural Cornish, New Hampshire, to escape his own celebrity.

Salinger attached a draft he had typed of the dust jacket, In this draft Salinger writes about his upcoming publication that both stories are concerned with Seymour Glass, the chief character of his still-uncompleted series about a "rather average American family of Vedic Sanskrit students, vaudevillians, poets, actors, writers, avaivartakas, Sappho buffs, and widely-alleged retreaters from "reality": the Glasses. Salinger goes on to contrast them with Frany and Zooey. He mentions the impending publication of further work as well. "It seems to me that I'd better hurry up and do it [publish] if I intend to avoid undue and undesirable collision with new material." Salinger ultimately found the process of publication too painful and never released any new material during his lifetime, and the final dust jacket version is brief, including only Salinger's synopsis of the book and his hint at future publications to come. Therefore, the majority, and unquestionably the most interesting part of these drafts remain unpublished, and unknown except through these originals from his own typewriter. Taken together with his uncommon discussion of The Catcher in the Rye, this set of documents covers nearly all of Salinger's published books.

Seller rating:
This seller has earned a 4 of 5 Stars rating from Biblio customers.
Biblio.com member since 2020
Woodland Hills, California
Ask Seller a Question

New
A new book is a book previously not circulated to a buyer. Although a new book is typically free of any faults or defects, "new"... [More]
jacket
Sometimes used as another term for dust jacket, a protective and often decorative wrapper, usually made of paper which wraps... [More]