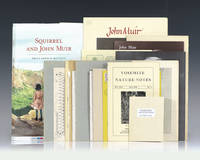 Rare collection of ephemera related to American naturalist John Muir. The collection includes a variety of periodicals articles, exhibition guides, and proof sheets including: John Muir 1838-1914: Keepsake for the Roxburghe-Zamorano Biennial Joint Meeting of 1996; The Presence of Mr. Muir. Keepsake for the John Muir Observance at Yosemite National Park, April 21-30, 1972, signed by publishers Bill Lane and Lew Osborne; John Muir: His World Exhibition pamphlet [Vacaville, California: Vacaville Museum, 1987]; Yosemite Earthquake Storms [Muir, John. Wawona Press, 1993. First state No. 1 of 3]; Reference List to the Published Writings of John Muir [Bradley, Cornelius B. Sierra Madre: Wawona Press, 1993]; Program of Activities for the John Muir Observance at Yosemite National Park, April 21-30, 1972; Twenty Hill Hollow [Muir, John. Wawona Press, 1998. Facsimile reprint]; Yosemite Nature Notes. Volume 17, No. 4, April 1938: "John Muir Number, Commemorating the Hundredth Anniversary of His Birth - April 21"; A Great Defender of The Animal Creation: John Muir about 1910 Prophet of the Wilderness [Destler, Paul. Banning, Calif.: Educational Foundation of the Desert Protective Council, Inc., 1962]; and a set of Set of color proof sheets from Emily McCully's Squirrel and John Muir. A fascinating archive documenting the broad scope of Muir's influence and work. Also known as "John of the Mountains" and "Father of the National Parks", influential Scottish-American naturalist and environmentalist John Muir's letters, essays, and books describing his adventures in nature, especially in the Sierra Nevada, have been read by millions. His activism helped to preserve the Yosemite Valley and Sequoia National Park, and his example has served as an inspiration for the preservation of many other wilderness areas. The Sierra Club, which he co-founded, is a prominent American conservation organization. In his later life, Muir devoted most of his time to the preservation of the Western forests. As part of the campaign to make Yosemite a national park, Muir published two landmark articles on wilderness preservation in The Century Magazine, "The Treasures of the Yosemite" and "Features of the Proposed Yosemite National Park"; this helped support the push for U.S. Congress to pass a bill in 1890 establishing Yosemite National Park. The spiritual quality and enthusiasm toward nature expressed in his writings has inspired readers, including presidents and congressmen, to take action to help preserve large nature areas.

facsimile
An exact copy of an original work. In books, it refers to a copy or reproduction, as accurate as possible, of an original... [More]
first state
used in book collecting to refer to a book from the earliest run of a first edition, generally distinguished by a change in some... [More]