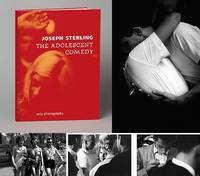 Berlin, Germany: Only Photography, 2015. First Edition. First Printing.. Hardcover. As New/No Dust Jacket, As Issued.. Berlin, Germany: Only Photography, 2015. Hardcover. As New/None, As Issued. First Edition/First Printing. 154 pages. The photographer's masterpiece, re-produced, not just re-issued. Limited Edition of 500 numbered copies. Should not be confused with and is different (in terms of production values, in a crucial sense) from the previous volume, "Age of Adolescence". Published as a hardcover original only. A brilliant production by Roland Angst: Oversize-volume format. Orange pictorial hard boards with blue titles embossed on the cover and spine, as issued. Photographs by Joseph Sterling. Texts by Stephen Daiter and Christiane Kuhlmann in English, German, and Japanese. Printed in tritone on pristine-white, thick coated stock paper in Berlin, Germany to the highest standards. The reproduction quality is exemplary in every respect: Its clarity, warmth, and most important of all, its tonal range, which captures the originals faithfully. Without DJ, as issued. Presents, in its Limited Edition format, Joseph Sterling's "The Adolescent Comedy". Published posthumously, THE definitive presentation of one of the best photographic records of The American Teen-ager. As originally conceived by Sterling for his Master's Thesis in 1962, the vintage prints were considerably darker than the later, contemporary prints he made. "In photography, the heart of the artistic message often has as much to do with how it is printed as with what it depicts. It is not just what you say, but how you say it. The prints in Sterling's original thesis really say it imbued with the angst, insecurity, alienation, and edginess of adolescence" (Stephen Daiter). "The Adolescent Comedy" was also Sterling's original title for the sequence. It is both apt and ironic, as it shows American kids to be both playful and serious, friendly and menacing, cheerful and pensive. They anticipate the work of many contemporary photographers without their necessarily being aware of it. Their remarkable simplicity and effortless grace have re-appeared in so many images of young people ever since. Still, few photographs have the timeless appeal as Sterling's work. Joseph Sterling died unexpectedly on November 12, 2010. An absolute "must-have" title for Joseph Sterling collectors. <b><i> This is a copy of the Limited Edition of 500 numbered copies, indicated/numbered as such on the Back Limitation Page. This title is a contemporary art photography classic. This is one of few copies of the Limited Edition still available online and is in especially fine condition: Clean, crisp, and bright, a pristine beauty. A scarce copy thus. </b></i> 136 tritone plates. One of the finest American photographers of our time. A fine copy. (SEE ALSO OTHER JOSEPH STERLING TITLES IN OUR CATALOG). ISBN 3981688546.

jacket
Sometimes used as another term for dust jacket, a protective and often decorative wrapper, usually made of paper which wraps...[more]
First Edition
In book collecting, the first edition is the earliest published form of a book. A book may have more than one first edition in...[more]
crisp
A term often used to indicate a book's new-like condition. Indicates that the hinges are not loosened. A book described as crisp...[more]
fine
A book in fine condition exhibits no flaws. A fine condition book closely approaches As New condition, but may lack the...[more]
spine
The outer portion of a book which covers the actual binding. The spine usually faces outward when a book is placed on a shelf....[more]