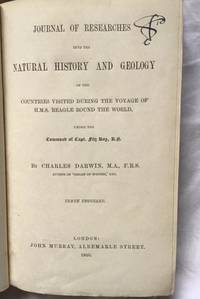 Journal of Researches into the Natural History and Geology of the countries visited during the voyage of H.M.SBeagle round the world, under the Command of Capt. Fitz Roy R.N.

Journal of Researches into the Natural History and Geology of the countries visited during the voyage of H.M.SBeagle round the world, under the Command of Capt. Fitz Roy R.N.

CHARLES DARWIN. Journal of Researches into the Natural History and Geology of the countries visited during the voyage of H.M.SBeagle round the world, under the Command of Capt. Fitz Roy R.N. Tenth thousand.

First published separately in 1839 from vol III of Fitzroy's Narrative of the voages of H.M. Ships Adventure and Beagle. This 1860 printing is the final definitive text. Charles Darwin's "first published book is undoubtedly the most often read and stands second only to On the Origin of Species as the most often printed. It is an important travel book in its own right and its relation to the background of his evolutionary ideas has often been stressed" (Freeman).

Darwin noted in his autobiography that "the voyage of the Beagle has been by far the most important event in my life and has determined my whole career. As far as I can judge of myself I worked to the utmost during the voyage from the mere pleasure of investigation, and from my strong desire to add a few facts to the great mass of facts in natural science. But I was also ambitious to take a fair place among scientific men The success of this my first literary child always tickles my vanity more than that of any other books."

(GB)
Bookseller Inventory #
b288
Title
Journal of Researches into the Natural History and Geology of the countries visited during the voyage of H.M.SBeagle round the world, under the Command of Capt. Fitz Roy R.N.
Author
Chares Darwin
Book condition
Used
Quantity available
1
Binding
Hardcover
Publisher
John Murray
Place of Publication
London
Date published
1860
Keywords
The Voyage of the Beagle

Fair
is a worn book that has complete text pages (including those with maps or plates) but may lack endpapers, half-title, etc....[more]
fine
A book in fine condition exhibits no flaws. A fine condition book closely approaches As New condition, but may lack the...[more]
spine
The outer portion of a book which covers the actual binding. The spine usually faces outward when a book is placed on a shelf....[more]
Cloth
"Cloth-bound" generally refers to a hardcover book with cloth covering the outside of the book covers. The cloth is stretched...[more]
gilt
The decorative application of gold or gold coloring to a portion of a book on the spine, edges of the text block, or an inlay in...[more]