Home Paul Haynes Rare Books Journal of a Residence in Ashantee. Comprising notes and researches relative to the Gold Coast, and the interior… 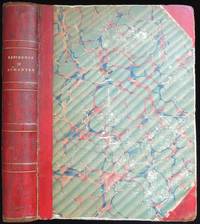 Journal of a Residence in Ashantee. Comprising notes and researches relative to the Gold Coast, and the interior of Western Africa; chiefly collected from Arabic MSS. and information communicated by the Moslems of Guinea: to which is prefixed an account of the origin and causes of the present war.

Journal of a Residence in Ashantee. Comprising notes and researches relative to the Gold Coast, and the interior of Western Africa; chiefly collected from Arabic MSS. and information communicated by the Moslems of Guinea: to which is prefixed an account of the origin and causes of the present war.

Front free endpaper inscribed with the account of Thomas Cary of the 4th West Indian Regiment, in his handwriting, during the Second Ashanti War under Colonel Conran, based at Cape Coast Castle, dated 13 May 1864. With a first hand account of the hardships of the four month Prah encampment.

To the verso is inscribed "What Jacob Says (Jacob was a parrot)", with his sayings continued onto the rear free endpaper. [Jacob the Parrot appears to have been extremely loquacious]

To the verso of the rear free endpaper is listed "Places visited by John Cary from January 1859". To 1887 "retired and lived at Ruthin".

"Thomas Alphonso Cary, born February 8th 1840, in Canada, joined the army as an ensign in the West India Regiment on 13 May 1859. He was a lieutenant on 11 Apr 1862 and went to West Africa with his regiment for the disastrous campaign of 1863-64. He reached the rank of captain on 23 Mar 1866, and on 13 Dec of that year exchanged to the 13th Light Infantry. On 1 May 1887 he relinquished command and, on his retirement was promoted to honorary major-general. He lived in Denbighshire with his wife Caroline (nee Haskell) who he married in 1887." [13th Regiment of Foot record] Major General Cary retired to Ty Mawr, Pentrecoch Manor, Llanfair Dyffryn Clwyd, Ruthin, he died on December 26th 1922 and is buried at St Cynfarch & St Mary's there.

Dated signature "Hy. Barnes" 24th Nov '39. to upper corner of the Dedication. Dated signature in the same hand Henry Barnes 24th November 1839 to the upper corner of the first page. Henry Barnes, of Prospect Hill, Cape Coast Castle, a merchant of the Africa Gold Coast. Henry Barnes (1800 - September 23, 1865), was born to a "Captain Barnes of a trade schooner" in either Anomabo or Cape Coast. He began in government service, making commercial contacts with Forster and Smith. The first man to cut timber for export in the hinterland of "Anamaboe" as early as 1843. He was called, together with David Livingstone, Aspinall Tobin, & Capt James Croft, , on the 18th May 1865 to give evidence to the Select Committee on Africa (Western Coast), and was questioned immediately after Livingstone.

"Sketches of the Lives and Labours of Our Great Men: Henry Barnes of Prospect Hill, Cape Coast Castle". The Gold Coast Aborigines, 19 March 1898.

Statement by Henry Barnes, 18 May 1865, in United Kingdom, Parliament, "Report of the Select Committee on Africa (Western Coast)"

Reindorf, Carl Christian. History of the Gold Coast and Asante, based on traditions and historical facts, comprising a period of more than three centuries from about 1500 to 1860. 1895.

Marbled boards
...[more]
spine
The outer portion of a book which covers the actual binding. The spine usually faces outward when a book is placed on a shelf....[more]
raised band(s)
Raised bands refer to the ridges that protrude slightly from the spine on leather bound books.  The bands are created...[more]
plate
Full page illustration or photograph. Plates are printed separately from the text of the book, and bound in at production. I.e.,...[more]
verso
The page bound on the left side of a book, opposite to the recto page.
tipped in
Tipped In is used to describe something which has been glued into a book. Tipped-in items can include photos, book plates,...[more]
title page
A page at the front of a book which may contain the title of the book, any subtitles, the authors, contributors, editors, the...[more]
calf
Calf or calf hide is a common form of leather binding.  Calf binding is naturally a light brown but there are ways to treat...[more]
inscribed
When a book is described as being inscribed, it indicates that a short note written by the author or a previous owner has...[more]
gutter
The inside margin of a book, connecting the pages to the joints near the binding.