Home The Book Collector ABAA, ILAB Journal of a Voyage for the Discovery of a North-West… 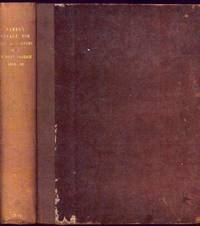 Journal of a Voyage for the Discovery of a North-West Passage from the Atlantic to the Pacific; Performed in the Years 1819-20

Journal of a Voyage for the Discovery of a North-West Passage from the Atlantic to the Pacific; Performed in the Years 1819-20

xxix+310pp+clxxix+[2 add] pages with the twenty plates called for, including six maps (4 folding, and the plate "Cutting into Winter Harbour" inserted as frontispiece rather than after page 97), tables and appendixes. Lacks Errata slip. Quarto (11 3/4" x 9 1/2") bound with original boards and new spine with gilt lettering. Second edition.

plate
Full page illustration or photograph. Plates are printed separately from the text of the book, and bound in at production. I.e.,...[more]
spine
The outer portion of a book which covers the actual binding. The spine usually faces outward when a book is placed on a shelf....[more]
errata
Errata: aka Errata Slip A piece of paper either laid in to the book correcting errors found in the printed text after being...[more]
New
A new book is a book previously not circulated to a buyer. Although a new book is typically free of any faults or defects,...[more]
gilt
The decorative application of gold or gold coloring to a portion of a book on the spine, edges of the text block, or an inlay in...[more]
hinge
The portion of the book closest to the spine that allows the book to be opened and closed.
quarto
The term quarto is used to describe a page or book size. A printed sheet is made with four pages of text on each side, and the...[more]
Poor
A book with significant wear and faults. A poor condition book is still a reading copy with the full text still readable. Any...[more]