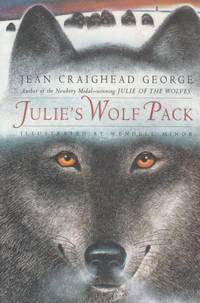 New York, NY HarperCollins, 1997. Hardcover First Edition [1997], First Printing stated. First Edition [1997], First Printing stated. Near Fine in Near Fine DJ: Both Book and DJ show only minute indications of use. Book shows binding square and secure; text clean. DJ price unclipped, but does show a crease to the front flap; crease to front end paper (apparently a production flaw); price intact. Overall, very close to 'As New'. NOT a Remainder, Book-Club, or Ex-Library. 8vo. 194pp. Illustrated by Wendell Minor. Hardcover with Dustwrapper. The wolf pack that saved the life of a human girl, Julie Edwards (Miyax Kapugen), has seen many changes since her return to her human family. So has Julie, who's grown up enough now to plan marriage to her beloved Peter, an Inuit from Siberia. While Julie formally studies the subjects that will enable her to live on the tundra and study her wolves first-hand, as her life's work, the pack's new alpha wolf learns to fill his dead father's role despite his extreme youth for bearing that responsibility. Among the challenges Kapu faces: Raw Bones, a former alpha from another pack who wants desperately (and tries repeatedly) to seize leadership for himself; Ice Blink, a female who carries the deadly rabies virus; and famine caused by caribou herds that fail to migrate south through the Avlik Pack's territory. Wolves, like humans, are social animals who communicate verbally as well as in other ways. Julie learned their language during her time among them, and the friendships she formed then remain strong enough so she can rescue two famine-born pups who would otherwise starve to death as their mother's milk fails to sustain them. But what is the eventual outcome of that rescue? And just how much do Julie's teachers really know about wolves, and how much do they assume incorrectly? In this third volume of Craighead George's trilogy, Julie comes of age as a sort of Jane Goodall of Alaskan wolves. If you're as sentimental as I am about babies of any species, you may find some of the brutally honest passages it contains hard to read; but without that honesty, this would not be the thoughtful tale that it is. It's suitable for readers of any age, and I recommend it highly.

dustwrapper
Also known as book jacket, dust cover, or dust wrapper, a dust jacket is a protective and decorative cover for a book that is...[more]
First Edition
In book collecting, the first edition is the earliest published form of a book. A book may have more than one first edition in...[more]
fine
A book in fine condition exhibits no flaws. A fine condition book closely approaches As New condition, but may lack the...[more]
remainder
Book(s) which are sold at a very deep discount to alleviate publisher overstock. Often, though not always, they have a remainder...[more]