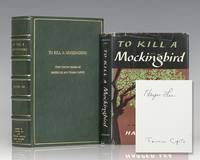 To Kill a Mockingbird.

To Kill a Mockingbird.

Philadelphia: J.B. Lippincott Company, 1960. First edition of Lee's Pulitzer Prize-winning novel which had an initial first printing of 5,000 copies. Octavo, original green cloth backed brown boards, titles to spine in gilt. Signed by both Harper Lee and Truman Capote on the front free endpaper. Truman Capote's friendship with Harper Lee began in the summer of 1929 when the two became next door neighbors in Monroeville, Alabama; both were the age of five. They shared a love of reading and began collaborating when Lee was gifted a typewriter by her father as a child. Lee drew on their friendship as inspiration for the characters Lee and Scout in her masterpiece To Kill A Mockingbird; Capote based his tomboy character Idabel Thompkins in his first novel Other Voices, Other Rooms on Lee. They worked together on Capote's true crime novel, In Cold Blood; Lee acted as his 'assistant reasearchist' and edited the final draft of the book. Upon its publication in 1965, Capote failed to acknowledge Lee's contributions to the book, after which their relationship was never the same. Fine in a near fine dust jacket with light rubbing and wear to the extremities. Jacket design by Shirley Smith. Photograph by Truman Capote. Housed in a custom full morocco clamshell box. Exceptionally rare, this is the first example we have seen signed by both Lee and Capote. To Kill a Mockingbird became an immediate bestseller and won the 1961 Pulitzer Prize for Fiction. The New Yorker declared it "skilled, unpretentious, and totally ingenious". It has gone on to become of the best-loved classics of all time and has been translated into more than forty languages selling more than forty million copies worldwide. Made into the Academy Award-winning film, directed by Robert Mulligan, starring Gregory Peck. It went on to win three Oscars: Best Actor for Gregory Peck, Best Art Direction-Set Decoration, Black-and-White, and Best Screenplay for Horton Foote. It was nominated for five more Oscars including Best Actress in a Supporting Role for Mary Badham, the actress who played Scout. In 1995, the film was listed in the National Film Registry. In 2003, the American Film Institute named Atticus Finch the greatest movie hero of the 20th century. In 2007 the film ranked twenty-fifth on the AFI's 10th anniversary list of the greatest American movies of all time. It was named the best novel of the twentieth century by librarians across the country (Library Journal).

To Kill a Mockingbird is a Pulitzer Prize-winning novel by Harper Lee published in 1960. It was instantly successful and has become a classic of modern American literature. The plot and characters are loosely based on the author's observations of her family and neighbors, as well as on an event that occurred near her hometown in 1936, when she was 10 years old. The novel is renowned for its warmth and humor, despite dealing with serious issues of rape and racial inequality.

Read more: Identifying first editions of To Kill a Mockingbird.

“I never deliberately learned to read……..Now that I was compelled to think about it, reading was something that just came to me, as learning to fasten the seat of my union suit without looking around, or achieving two bows from a snarl of shoelaces. I could not remember when the line above Atticus’s moving finger separated into words, but I had stared at them all the evenings in my memory, listening to the news of the day, Bills To Be Enacted into Laws, the diaries of Lorenzo Day - anything Atticus happened to be reading when I crawled into his lap every night. Until I feared I would lose it, I never loved to read. One does not love breathing.”

To Kill a Mockingbird is the first published novel by American author, Harper Lee. Almost-nine-year-old Scout (Jean Louise) Finch had never set eyes on her reclusive neighbour, Boo (Arthur) Radley, until the night of Halloween, 1935. To Scout, her almost-thirteen-year-old brother, Jem (Jeremy Atticus Finch) and their summer vacation friend, Dill (Charles Parker Harris), Boo Radley was an almost mythical creature who remained hidden in the Radley house and was the subject of much childhood speculation. Their fascination was frowned upon by their father, Atticus, a lawyer elected to the state legislature.

When Atticus took on the defence of a black man, he warned his children that some unpleasantness could well be the result. This was, after all, Alabama, and attitudes to race and class were strongly prejudiced, but what happened after the verdict was beyond anyone’s expectations.

Lee’s telling of events from Scout’s point of view gives the reader a unique perspective that includes much humour as Scout, Jem and Dill learn life’s lessons. The Finch’s black housekeeper, Calpurnia, their neighbour, Miss Maudie Atkinson, their Aunt Alexandra, Atticus, and even Jem are given words of wisdom that will resonate today as they did when the book was first published: “People in their right minds never take pride in their talents” and “You never really understand a person until you consider things from his point of view – until you climb into his skin and walk around in it” are but two examples.

morocco
Morocco is a style of leather book binding that is usually made with goatskin, as it is durable and easy to dye. (see also...[more]
First Edition
In book collecting, the first edition is the earliest published form of a book. A book may have more than one first edition in...[more]
Cloth
"Cloth-bound" generally refers to a hardcover book with cloth covering the outside of the book covers. The cloth is stretched...[more]
gilt
The decorative application of gold or gold coloring to a portion of a book on the spine, edges of the text block, or an inlay in...[more]
jacket
Sometimes used as another term for dust jacket, a protective and often decorative wrapper, usually made of paper which wraps...[more]
New
A new book is a book previously not circulated to a buyer. Although a new book is typically free of any faults or defects,...[more]
octavo
Another of the terms referring to page or book size, octavo refers to a standard printer's sheet folded four times, producing...[more]
rubbing
Abrasion or wear to the surface. Usually used in reference to a book's boards or dust-jacket.
fine
A book in fine condition exhibits no flaws. A fine condition book closely approaches As New condition, but may lack the...[more]
spine
The outer portion of a book which covers the actual binding. The spine usually faces outward when a book is placed on a shelf....[more]
clamshell box
A protective box designed for storing and preserving a bound book or loose sheets. A clamshell box is hinged on one side, with...[more]