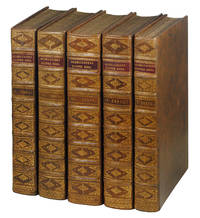 Folio (393 x 245 mm). Ausburg and Ulm: Gedruckt bey C.U. Wagner, 1731-5. Folio (393 x 245 mm), 5 vols.: [48], 276; [8], 276-672; [8], 572; 573-1140; 1141-1426, [79] pp. With engraved frontispiece portrait of the author facing an engraved allegorical frontispiece, and 762 other engraved plates after drawings by Johann Melchior Füssli, rainbow plate in vol. 1 partly colored. Modern mottled full calf, gilt-tooled and lettered backstrips with red morocco labels and raised bands, all edges decoratively stamped, new endpapers and headbands. Occasional browning and spotting, some volumes with occasional dampstaining; overall very good or better in a restrained and appropriate modern binding. § First edition, the German edition, published concurrently in Latin. Scheuchzer’s monumental Physica Sacra or Kupfer-Bibel, the “Copper Bible” so called for the 762 magnificent copper-plate engravings, illustrating and expanding upon the biblical text throughout. Johann Jakob Scheuchzer (1672-1733) was a polymath Swiss scholar, a physician, professor of mathematics, a chair in physics, and one of the fathers of paleontology, as well as an ardent Christian. With the Physica Sacra, he intended to apply Enlightenment science to the understanding of scripture, and a Biblical frame of analysis to the rising scientific disciplines of geology, biology, and paleontology.The scale of the endeavor is astounding. Genesis alone is illustrated with 114 plates, each accompanied by extensive commentary. Consideration is given to the transition from chaos to a Copernican planetary system, carefully-observed studies of created nature in all its forms, the construction and meteorological fate of the ark, contemporary fossil evidence of the antediluvian world, and to the subsequent human histories viewed through scientific lenses from anatomy to zoology. Scheuchzer was also an avid fossil collector and director of the Zurich Museum of Natural History, and the most famous illustration must be that of his prized fossil Homo diluvii testis, "Man, a witness of the Deluge", considered at length in the commentary and described as “one of the rarest relics which we have of that accursed race which was buried under the waters” (a claim Cuvier later overturned when he identified it as a giant salamander). The drawings for the plates were made by Johann Melchior Füssli, with the addition of highly-elaborate engraved borders by J.D. Preissler (heavily allegorical, carefully scientific, or both) a body of work which marks an important juncture between Baroque illustration and the rise of scientific illustration. “Scheuchzer’s basic idea was to create a double defense, on the one hand against the critics of the Scripture, and on the other against the critics of the new sciences. In the end, the Physica Sacra did not tie the two books of revelation closer together, as was intended. On the contrary, it separated them from each other and made one of them dispensable for the knowledge of nature.” (Michael Kempe, “Sermons in Stone”, in The Book of Nature in Early Modern and Modern History, 2006, p.111). Provenance: Pasted label bearing hand-drawn coat of arms with the name "L E Høegh-Guldberg" dated 1794 on the front free endpaper, almost certainly Lucie Emmerentze Høegh-Guldberg (1738-1807). She was the wife of Ove Høegh-Guldberg, the de facto Prime Minister of Denmark under the insane monarch Christian VII, marrying him at the age of 30 after the death of her sister, his first wife. Two additional ownership marks, the first dated 1835, suggest the book was passed down through the family to Sophie Elizabeth Høegh-Guldberg, who inscribed her name in 1903.

5 day return guarantee, with full refund not including shipping costs for up to 5 days after delivery if an item arrives misdescribed or damaged.

Seller rating:
This seller has earned a 5 of 5 Stars rating from Biblio customers.
Biblio.com member since: 2005
San Francisco, California
Ask Seller a Question

John Windle Antiquarian Bookseller offers an exceptional selection of rare books and manuscripts from medieval times through the twentieth century; we specialize in illustrated material, particularly the work of William Blake and his circle. Located in downtown San Francisco, we have served an international clientele of private collectors, libraries, and institutions for 35 years. We are actively purchasing books and manuscripts in all fields, especially medieval illuminated and text manuscripts; material on California, Hawaii, and Pacific voyages; illustrated books and fine bindings from the 15th through the 20th century; and fine press printing. William Blake, Mary Wollstonecraft, and Thomas Frognall Dibdin remain special interests. We hope you will contact us for any of your book needs: restoration and repair of books and manuscripts; bibliographical information and up-to-date retail and auction prices; informal valuations to formal appraisals of single items or entire collections; auction purchases worldwide (including eBay); and of course, purchases for and sales of your own collections. We guarantee every transaction unconditionally and, as members in good standing of the ABAA, ILAB, and PBFA, we subscribe to the code of ethics endorsed by reputable antiquarian booksellers worldwide.

plate
Full page illustration or photograph. Plates are printed separately from the text of the book, and bound in at production. I.e.,...[more]
New
A new book is a book previously not circulated to a buyer. Although a new book is typically free of any faults or defects,...[more]
calf
Calf or calf hide is a common form of leather binding.  Calf binding is naturally a light brown but there are ways to treat...[more]
inscribed
When a book is described as being inscribed, it indicates that a short note written by the author or a previous owner has...[more]
First Edition
In book collecting, the first edition is the earliest published form of a book. A book may have more than one first edition in...[more]
morocco
Morocco is a style of leather book binding that is usually made with goatskin, as it is durable and easy to dye. (see also...[more]
edges
The collective of the top, fore and bottom edges of the text block of the book, being that part of the edges of the pages of a...[more]
raised band(s)
Raised bands refer to the ridges that protrude slightly from the spine on leather bound books.  The bands are created...[more]