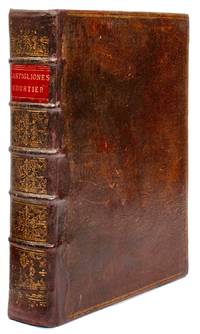 l Cortegiano, or the Courtier: Written by Conte Baldassar Castiglione. And a New Version of the same in English. Together with Several of his Celebrated Pieces, as well Latin as Italian, both in Prose and Verse. To which is prefix'd, The Life of the Author. By A.P. Castiglione, of the same Family

l Cortegiano, or the Courtier: Written by Conte Baldassar Castiglione. And a New Version of the same in English. Together with Several of his Celebrated Pieces, as well Latin as Italian, both in Prose and Verse. To which is prefix'd, The Life of the Author. By A.P. Castiglione, of the same Family

London: Printed by W. Bowyer, for the Editor, 1727. First Edition thus. Full Calf. Fine. First edition of the third English version of Castiglione's classic treatise on etiquette, the most celebrated instruction manual on the courtly manners of the Italian High Renaissance. 4to: [62],480,473-508pp [470, 471 misnumbered 471, 470 respectively; 473-79 repeated but text continuous and complete], with fine copper-engraved frontispiece by Vertue after the portrait by Raphael and parallel texts in Italian and English. Contemporary calf, spine in six compartments very richly gilt between raised bands, red morocco lettering piece gilt, covers framed with French fillets, edges speckled red. A superb copy, internally fine, the binding tight and secure, very expertly rebacked. Lowndes 386. ("emphatically termed by the Italians the 'golden book'.") ESTC N956 ("In this issue [of two], 'To the reader' is on the verso of the last page of 'To the king', and there is a list of subscribers.") Bowyer ledgers 1296 (showing "printing on three sizes of paper: 970 copies on demy, 24 on royal, 7 on writing royal"). PMM 59 (Venice, 1528). First printed in Venice by Aldus, in 1528, and reprinted innumerable times since in every major European language. The earliest version in English, that of Sir Thomas Hoby, appeared in 1561; the second, by Robert Samber, in 1724. Castiglione's Il libro del cortegiano (The Book of the Courtier) "is a classic of Western literature: a conduct book describing the ideal courtier of the Renaissance (and to some degree the ideal court lady too); it is also a highly polished literary dialogue rich in classical lore and representative of the avant-garde culture of fifteenth- and sixteenth-century Italy. Responsible for transmitting fundamental cultural ideas abroad, among them the notion of the all-rounded, or 'Renaissance', man or woman, the stress on grace and elegance as part of the striving for perfection, and the details of the Neoplatonic love-theory then in vogue; it is also credited with having given rise in France to the concept of the gentilhomme and in England to that of the gentleman. . . . Interwoven into the fabric of the text is a wide spectrum of topics ranging from a theory of humor to an ethically grounded view of politics. . . . Truly encyclopedic in scope, The Book of the Courtier has been hailed as a veritable compendium of Renaissance culture." (Literary Encyclopedia) N. B. With few exceptions (always identified), we only stock books in exceptional condition. All orders are packaged with care and posted promptly. Satisfaction guaranteed.

(US)
Bookseller Inventory #
BB1278
Title
l Cortegiano, or the Courtier: Written by Conte Baldassar Castiglione. And a New Version of the same in English. Together with Several of his Celebrated Pieces, as well Latin as Italian, both in Prose and Verse. To which is prefix'd, The Life of the Author. By A.P. Castiglione, of the same Family
Author
CASTIGLIONE, Balthasar (1478-1529
Format/binding
Full Calf
Book condition
Used - Fine
Quantity available
1
Edition
First Edition thus
Publisher
Printed by W. Bowyer, for the Editor
Place of Publication
London
Date published
1727
Bookseller catalogs
HAND-PRESS PERIOD;

raised band(s)
Raised bands refer to the ridges that protrude slightly from the spine on leather bound books.  The bands are created...[more]
fine
A book in fine condition exhibits no flaws. A fine condition book closely approaches As New condition, but may lack the...[more]
morocco
Morocco is a style of leather book binding that is usually made with goatskin, as it is durable and easy to dye. (see also...[more]
spine
The outer portion of a book which covers the actual binding. The spine usually faces outward when a book is placed on a shelf....[more]
tight
Used to mean that the binding of a book has not been overly loosened by frequent use.
gilt
The decorative application of gold or gold coloring to a portion of a book on the spine, edges of the text block, or an inlay in...[more]
rebacked
having had the material covering the spine replaced. ...[more]
First Edition
In book collecting, the first edition is the earliest published form of a book. A book may have more than one first edition in...[more]
calf
Calf or calf hide is a common form of leather binding.  Calf binding is naturally a light brown but there are ways to treat...[more]
verso
The page bound on the left side of a book, opposite to the recto page.
edges
The collective of the top, fore and bottom edges of the text block of the book, being that part of the edges of the pages of a...[more]