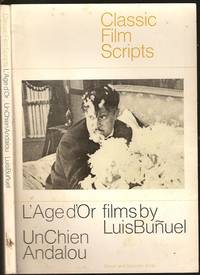 120 pages with photographs and movie stills. Octavo (8" x 5 1/2") bound in original publisher's pictorial wrappers. First edition. Luis Buñuel Portolés was a Spanish filmmaker who worked in Spain, Mexico and France. When Luis Buñuel died at age 83, his obituary in the New York Times called him "an iconoclast, moralist, and revolutionary who was a leader of avant-garde surrealism in his youth and a dominant international movie director half a century later". His first picture—made in the silent era—was called "the most famous short film ever made" by critic Roger Ebert, and his last film—made 48 years later—won him Best Director awards from the National Board of Review and the National Society of Film Critics. Often associated with the surrealist movement of the 1920s, Buñuel created films from the 1920s through the 1970s. His work spans two continents, three languages, and an array of genres, including experimental film, documentary, melodrama, satire, musical, erotica, comedy, romance, costume dramas, fantasy, crime film, adventure, and western. Despite this variety, filmmaker John Huston believed that, regardless of genre, a Buñuel film is so distinctive as to be instantly recognizable, or, as Ingmar Bergman put it, "Buñuel nearly always made Buñuel films". (Wikipedia). Condition: Underlining through out, soiled else about very good.

New
A new book is a book previously not circulated to a buyer. Although a new book is typically free of any faults or defects,...[more]
soiled
Generally refers to minor discoloration or staining.
octavo
Another of the terms referring to page or book size, octavo refers to a standard printer's sheet folded four times, producing...[more]
First Edition
In book collecting, the first edition is the earliest published form of a book. A book may have more than one first edition in...[more]
wrappers
The paper covering on the outside of a paperback.  Also see the entry for pictorial wraps, color illustrated coverings for...[more]