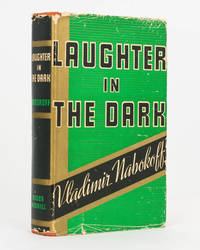 Laughter in the Dark

Laughter in the Dark

Indianapolis: The Bobbs-Merrill Company, 1938. Hardcover. Fine/Dust Jacket Included. Indianapolis, The Bobbs-Merrill Company, 1938 (first thus). Octavo, 292 pages. Orange cloth lettered and decorated in black on the spine; tiny bump to the front top and rear bottom edge of the boards; leading edge uncut; endpapers a little offset; essentially a fine copy with the unclipped dustwrapper a little worn, with slight loss to the ends of the spine. Three variant bindings exist - green, orange and brown - apparently in that order of issue. The author's first book to be published in the USA; 'A different version of this novel has been published in England under the title "Camera Obscura" (verso of the title page). The story behind this turn of events is intriguing. 'At the age of thirty-one, living as a penniless exile in Berlin, Vladimir Nabokov composed, in Russian, a novel called "Camera Obscura," which he published serially in an émigré journal in 1930. Five years later, the book was translated into English by a woman named Winifred Roy, for the British publisher John Long. But Nabokov claimed that Roy's translation was "sloppy" and "full of blunders" and, when approached by a publisher about an American edition in 1938, he chose to retranslate the novel himself. The new version (Nabokov's first English literary production), which he retitled "Laughter in the Dark," is a masterful short novel about an older man's obsession with a young girl, and is today considered an important precursor to "Lolita"' (John Colapinto in 'The New Yorker', 4 December 2014). The article compares the two editions, based on the author's extensively annotated copy of the earlier one; 'he had revised virtually every page of Roy's version in a storm of handwritten additions, crabbed interlineations, carat-sprinkled paragraphs, and bursts of inspiration'. Colapinto concludes that 'Camera Obscura' shows that Nabokov 'was indeed capable of writing a second-rate novel. (He knew it, and rewrote it.) ... It also exonerates, to a degree, poor forgotten Winifred Roy, whose supposed ineptitude has long been the accepted reason for Nabokov's rewrite. Clearly, there were other motivations behind his decision to retranslate the novel'.

New
A new book is a book previously not circulated to a buyer. Although a new book is typically free of any faults or defects,...[more]
fine
A book in fine condition exhibits no flaws. A fine condition book closely approaches As New condition, but may lack the...[more]
octavo
Another of the terms referring to page or book size, octavo refers to a standard printer's sheet folded four times, producing...[more]
spine
The outer portion of a book which covers the actual binding. The spine usually faces outward when a book is placed on a shelf....[more]
dustwrapper
Also known as book jacket, dust cover, or dust wrapper, a dust jacket is a protective and decorative cover for a book that is...[more]
jacket
Sometimes used as another term for dust jacket, a protective and often decorative wrapper, usually made of paper which wraps...[more]
Cloth
"Cloth-bound" generally refers to a hardcover book with cloth covering the outside of the book covers. The cloth is stretched...[more]
Poor
A book with significant wear and faults. A poor condition book is still a reading copy with the full text still readable. Any...[more]