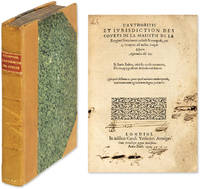 1594. London, 1594. Beale T328. London, 1594. Beale T328. First Edition of Crompton's Survey of the Courts [Crompton, Richard (d. 1599)]. L'Authoritie et Iurisdiction des Courts de la Maiestie de la Roygne: Nouelment Collect & Compose, Per R. Crompton del Milieu Temple Esquire, Apprentice del Ley. Si Seuris Index, Mitisis Corde Memento, Dicito, quae Possunt Dicta Decere Senem. London: In Aedibus Caroli Yetsweirti, 1594. [iv], 232 ff. Quarto (7-1/4" x 5-1/4"). Later three-quarter calf over marbled boards, raised bands and lettering piece to spine. Light rubbing to extremities, a few minor nicks to boards, hinges cracked. Woodcut head-pieces and decorated initials. Moderate toning to text, somewhat heavier in places, some leaves have faint dampspotting or edgewear. Small early owner initials and struck-through signatures to title page, one with burn-though, early annotations and underlining to a few leaves, interior otherwise clean. An appealing copy. $1,000. * First edition. Crompton was a bencher of the Middle Temple during the reign of Henry VIII and the author of several notable juristic works. L'Authoritie et Iurisdiction is considered to be his principal work. It is essentially a digest of the Year Books and other cases applicable to the subject. Turning to William Fulbecke's A Direction or Preparative to the Study of the Lawe (1600), we see that its value was recognized almost immediately: "Master Crompton has taken great paynes in this study, and his books are in every man's hands, which prooveth their generall allowance, his cases are very profitable, and apt for the title to which they are applyed, and so compendiously collected, that a man may by them in a few howers gaine great knowledge" (cited in Holdsworth). On a broader scale, Crompton offers legal justification for the creation of a rigidly hierarchical "natural" society governed by a powerful monarch. This attitude, articulated by Bodin among others, was shared by several conservatives in England and Europe during the Late Renaissance. Holdsworth, History of English Law IV: 212. English Short-Title Catalogue S109077. Beale, A Bibliography of Early English Law Books T328.

leaves
Very generally, "leaves" refers to the pages of a book, as in the common phrase, "loose-leaf pages." A leaf is a single sheet... [More]
First Edition
In book collecting, the first edition is the earliest published form of a book. A book may have more than one first edition in... [More]
calf
Calf or calf hide is a common form of leather binding.  Calf binding is naturally a light brown but there are ways to treat... [More]
quarto
The term quarto is used to describe a page or book size. A printed sheet is made with four pages of text on each side, and the... [More]
rubbing
Abrasion or wear to the surface. Usually used in reference to a book's boards or dust-jacket.
title page
A page at the front of a book which may contain the title of the book, any subtitles, the authors, contributors, editors, the... [More]
raised band(s)
Raised bands refer to the ridges that protrude slightly from the spine on leather bound books.  The bands are created... [More]
spine
The outer portion of a book which covers the actual binding. The spine usually faces outward when a book is placed on a shelf.... [More]
cracked
In reference to a hinge or a book's binding, means that the glue which holds the opposing leaves has allowed them to separate,... [More]
Marbled boards
... [More]