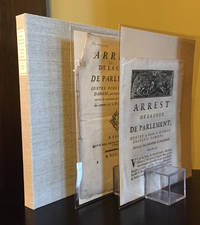 First printing of all the gruesome details of the trial and death sentence (by torture) on Robert-Francois Damiens for feebly attempting to assassinate Louis XV. The sentence mandated execution by means of torture that was so cruel, so ghastly, so horrible, and so sickening, that it merited immediate and justifiable outrage on an international scale, and even now continues to shock legal and sociological historians, notably Michel Fouchault, who described Damiens's torture and execution at length in his pioneering work on "Discipline and Punishment" (1979). Damiens' was the last sentence of its kind in France, and the events prompted real changes in the punishment phase of the legal system, in France and elsewhere.

By the present Parliamentary decree, the Royal Executioner, aided by sixteen assistants, was ordered first to torture Damiens with red-hot pincers; the hand with which Damiens had held the knife during the attempted assassination was to be burned with sulpher. Then molten wax, molten lead, and boiling oil were to be poured into the aforementioned wounds. He was then to be publicly drawn and quartered.

All of this went according to plan, except for the final punishment: Damiens' limbs did not separate, even after several horrific hours, during which time two of the four horses became so exhausted that they had to be replaced by two fresh horses. Damiens' endless shrieks were so incredibly disturbing that many people in the crowd -- including the Royal Executioner, Nicolas-Charles-Gabriel Sanson -- were unable to watch and turned away. The officiants came to realize that the process simply was simply not working. As Sanson had abrubtly resigned from his post, his son was ordered to partially cut Damiens' limbs with an ax in order to save the horses from further misery. When at last Damiens' limbs were pulled apart, his reportedly still-living torso was burnt at the stake.

Ours appear to be the only copies on the market.

ADDED: The Edict which sentenced Damiens' family, their only crime being that they were in some way related to him. The "Arrest de la cour de Parlement, contre la famille de Robert-François Damiens, Extrait des registres du Parlement" is the infamous 3-page pamphlet that was published on March 29, 1757, i.e. on the day following Damiens' execution; it records the Parliamentary sentence of Damiens' family which mandated that: the house of Damiens' birth was to be razed; his wife, daughter, and father were to be banished from France, and all other relatives were ordered to change their names with immediate effect.

Unbound
A book or pamphlet which does not have a covering binding, sometimes by original design, sometimes used to describe a book in...[more]
First Edition
In book collecting, the first edition is the earliest published form of a book. A book may have more than one first edition in...[more]
edges
The collective of the top, fore and bottom edges of the text block of the book, being that part of the edges of the pages of a...[more]