Home Rare Books American History More rare books from jakoll THE LAWS OF THE UNITED STATES OF AMERICA- Vol. V-1801- Acts Passed At The First and Second Sessions of the… 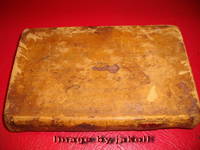 THE LAWS OF THE UNITED STATES OF AMERICA- Vol. V-1801- Acts Passed At The First and Second Sessions of the Sixth Congress of the United States

THE LAWS OF THE UNITED STATES OF AMERICA- Vol. V-1801- Acts Passed At The First and Second Sessions of the Sixth Congress of the United States

by Published by Authority

New Jersey Ave, Washington City: Samuel Harrison Smith, 1801. THE LAWS OF THE UNITED STATES OF AMERICA- Vol. V- 1801- Acts Passed At The First and Second Sessions of the Sixth Congress of the United States: Covering Sessions: Dec 2,1799 to Nov 4, 1800.- Printed in 1801- on title page- Samuel Harrison Smith- New Jersey Ave, Washington City-Near the Capitol.- Signed by Captain Ephraim H. Mahurin x 2 (War of 1812) and son James H. Mahurin- http://freepages.genealogy.rootsweb.ancestry.com/~genjournalz/mahurin.html- Hardcover:-8vo- Acceptable-Fair/ no jacket as issued- original full calf leather, rubbed and soiled-but tight and maroon leather with gilt paste-on title on spine still complete and legible- [i-iii], [1-3], 4-223, [i], ii-vii, [225-227], 228-352, [i], ii-iv, [1-22- index], blank blank., are age toned, some light dampstains in some margins, edges have some light staining as do covers- possible bloodstains, please note inscription on first blank- 2 signatures by Mahurin, one dated April 11 th, 1811, his stamp, again his signature and Columbia, NH- and "....taken from S. [Samuel] Hugh's _____, (body?)- [did he recover his property?], Aug. 10, 1812.- Quite possible, since this book went through the War of 1812- Inscription on 1st rear blank- "Thomas Truxton (crossed out) again Thomas Truxton (again crossed out) and Alexander Truman (partly crossed out)...for value received, payment received."- Truxton being of course future Admiral Thomas Truxton (http://bing.search.sympatico.ca/?q=thomas%20truxton&mkt=en-ca&setLang=en-CA) but, who was a privateer during the War of 1812. Quite possible a debt Mahurin occured, but more likely a debt Truxton had occured and the debt was crossed out by Mahurin. Fascinating! Also- It was resolved on Dec 24, 1799 to erect a marble statue to Washington and under it interre his body (page 208-210)....and......"...that the President of the United States be requested to direct a copy of these resolutions to be transmitted to Mrs. Washington........"- Now, this copy has written in ink on front cover...."Proceedings of the Sixth Congress of the United States at............[some words are extremely difficult to make out] at bottom very faintly a signature. (Looks like John ????) and , on rear cover, quite plainly "----? [Dedicated to] Gen. George Washington, the Father of Our Country."- Fep is partially adhered to inner front cover pastedown, but has possibilities of being lifted by careful methods. Clearly, a 200th anniversary piece of Americana from 1812 and on the death of Washington and the 6th Congress. Non-fiction-history-US-laws-government-congress-Washington-Adams-Marshall-Americana. - (3178). Signed by Historical Persons. 1st Edition-1st Printing. Leather. Acceptable-Fair/No Jacket as Issued. 8vo - over 7¾" - 9¾" tall. Association Copy.

Payment must be received within 7 working days. Payments by cheque will be held 10 working days to clear. Full refund of purchase price only if item has been misdescribed as pertains to condition. Mailing costs non-refundable. Item must be returned in the same condition as it was originally sent out for refund conditions to apply.

Seller rating:
This seller has earned a 3 of 5 Stars rating from Biblio customers.
Biblio.com member since 2007
Mansonville, Quebec
Ask Seller a Question

We specialize in Modern 1st Edition, Children's books, Vintage classics, vinyl records, original movie posters, sports cards, comics, postage stamps and coins.We only sell online at this time and have been doing so for over 30 years.

calf
Calf or calf hide is a common form of leather binding. Calf binding is naturally a light brown but there are ways to treat the... [More]
Association copy
An association copy is a copy of a book which has been signed and inscribed by the author for a personal friend, colleague, or... [More]
spine
The outer portion of a book which covers the actual binding. The spine usually faces outward when a book is placed on a shelf.... [More]
gilt
The decorative application of gold or gold coloring to a portion of a book on the spine, edges of the text block, or an inlay in... [More]
tight
Used to mean that the binding of a book has not been overly loosened by frequent use.
edges
The collective of the top, fore and bottom edges of the text block of the book, being that part of the edges of the pages of a... [More]
jacket
Sometimes used as another term for dust jacket, a protective and often decorative wrapper, usually made of paper which wraps... [More]

More books like this are on sale from jakoll at 20% off!