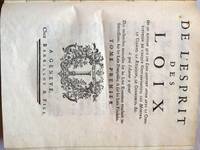 See Volpilhac-Auger, G.Sabbagh & Weil: Un auteur en quête d'êditeurs? Histoire éditoriale de l'oeuvre de Montesquieu. 2011, pp.47-67, 413-416. It is believed that the first edition was printed in 500 t0 1500 copies, nobody really knows; part of the edition seems to have been seized by customs or lost in transport; in particular a large number of copies sent to England seem to have disappeared. Montesquieu was horrified by the errors he found which explains why no less than four kinds of errata were printed from January 1749 - three of which were destined for the first edition and inserted in the last copies that had been unsold and uncirculated by that time.

FIRST EDITION of Montesquieu's [1689-1755] great L'esprit des loix in which he argued that the best government would be one in which power was balanced among three groups of officials. He thought England - which divided power between the king (who enforced laws), Parliament (which made laws), and the judges of the English courts (who interpreted laws) - was a good model of this. Montesquieu called the idea of dividing government power into three branches the \"separation of powers.\" He thought it most important to create separate branches of government with equal but different powers. That way, the government would avoid placing too much power with one individual or group of individuals. He wrote, \"When the [law making] and [law enforcement] powers are united in the same person... there can be no liberty.\" According to Montesquieu, each branch of government could limit the power of the other two branches. Therefore, no branch of the government could threaten the freedom of the people. His ideas about separation of powers became the basis for the United States Constitution.

John Maynard Keynes in the manuscript preface to his French edition of The General Theory described Montesquieu as the greatest French economist: "Montesquieu was the real French equivalent of Adam Smith. The greatest of your economists, head and shoulders above the Physiocrats in penetration, clear-headedness and good sense".

morocco
Morocco is a style of leather book binding that is usually made with goatskin, as it is durable and easy to dye. (see also...[more]
G
Good describes the average used and worn book that has all pages or leaves present. Any defects must be noted. (as defined...[more]
gilt
The decorative application of gold or gold coloring to a portion of a book on the spine, edges of the text block, or an inlay in...[more]
errata
Errata: aka Errata Slip A piece of paper either laid in to the book correcting errors found in the printed text after being...[more]
calf
Calf or calf hide is a common form of leather binding.  Calf binding is naturally a light brown but there are ways to treat...[more]
First Edition
In book collecting, the first edition is the earliest published form of a book. A book may have more than one first edition in...[more]
fine
A book in fine condition exhibits no flaws. A fine condition book closely approaches As New condition, but may lack the...[more]
quarto
The term quarto is used to describe a page or book size. A printed sheet is made with four pages of text on each side, and the...[more]