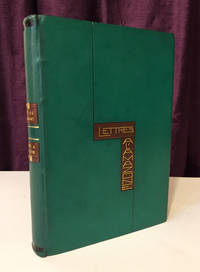 Paris: George Cres et Cie, 1914. First Edition. Small 4to. Woodcut frontispiece printed in black and sepia by P.-Eug. Vibert. Contemporary Art-Deco binding by Madeline Gras: full smooth green calf, front and back covers inlaid with two rectangles of brown calf, gilt with the title (upper cover) and oblong ornaments (lower cover), adorned with simple vertical black lines, top edges gilt, others gilt on the rough, endpapers and pastedowns of light brown silk, second endpapers of paper-thin wood (sic), original wrappers bound in (somewhat soiled). Traces of insignificant foxing on Curious pencil notes (by the binder?) on the Table, p. 3, and title-page (date 1914 erased). Original chemise and slipcase (a little worn): smooth light brown calf on spine of chemise, inlaid with brown labels in the center, gilt, boards of paper-thin wood, slipcase covered with paper-thin wood. One of 8 copies on Papier de Chine, from a total edition of 1075. The binding is signed MAD[ELINE] GRAS on the front turn-in. Madeline Gras (1891-1958), was a Parisian binder who first appeared in 1922 at the Salon de la Societe nationale des Beaux-Arts. She regularly exhibition at the Exposition des Artistes decorateurs from 1928 onward. Her skill was such that on occasion she was retained by noted Parisian binder Noulhac; her patrons included David Weill and other important bibliophiles. After WWII, she continued creating fine and decorative bindings until her death. Flety (p. 84) remarks on her inspiration "le plus heureuse la perfection technique de l'execution." Bookbindings by Madeline Gras are scarce on the market; only a single binding by her is traced on Rare Book Hub, which currently lists more than 8 million records in the Rare Book Transaction History database (Sothebys NY, 6/16/2005 lot 157). See: L.-M. Biheng-Martinon, Voyage au pays des relieurs (2004) p. 141.

First Edition
In book collecting, the first edition is the earliest published form of a book. A book may have more than one first edition in...[more]
spine
The outer portion of a book which covers the actual binding. The spine usually faces outward when a book is placed on a shelf....[more]
gilt
The decorative application of gold or gold coloring to a portion of a book on the spine, edges of the text block, or an inlay in...[more]
wrappers
The paper covering on the outside of a paperback.  Also see the entry for pictorial wraps, color illustrated coverings for...[more]
calf
Calf or calf hide is a common form of leather binding.  Calf binding is naturally a light brown but there are ways to treat...[more]
edges
The collective of the top, fore and bottom edges of the text block of the book, being that part of the edges of the pages of a...[more]
fine
A book in fine condition exhibits no flaws. A fine condition book closely approaches As New condition, but may lack the...[more]