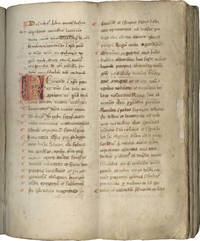 RARE MEDIEVAL MANUSCRIPT ON THE HEALTH OF HORSES. In Italian and Latin, illustrated manuscript on paper, Northern Italy (perhaps Ferrara), dated 1434. Dimensions 283 x 217 mm, 82 folios, complete, watermark of three mountains, phrases in decorative cartouches, written in in a gothic bookhand influenced by humanistic script in two columns of 29-35 lines, large painted initials in red throughout, large divided initial in red and brown on f. 1, five marginal drawings in red or in brown with yellow wash. BINDING: CONTEMPORARY BINDING of limp vellum with spine sewn in account-book style in a cloth clamshell case. TEXT: Rare signed and dated manuscript of the Italian translation of one of the principal treatises on veterinary medicine for horses. PROVENANCE: Copied for the use of Chalavereso, who very likely was the ducal farrier at the court of Niccolo III d'Este in Ferrara. The manuscript is dated 1434 (lower margin of f. 33), and the colophon on f. 69v records that it was copied by the scribe Guido de Santo Angelo for the farrier Chalavereso, in honor of St. Allo, or Eligius, patron saint of farriers. The scribe appears to be unrecorded, but he may well have been related to Donato de Santo Angelo, author of another late fifteenth-century Italian treatise on farriery. The list of proverbs at the end is signed by the scribe Giovanni Antonio Cadamosto. He is probably the same Giovanni Cadamosto as the author and donor of the great illustrated herbal given in 1471 to Borso d'Este, marquis of Ferrara (1450-1471), thus in all likelihood placing the manuscript at the d'Este court. Later, the manuscript belonged to a private collection. CONDITION: some minor wear and browning, preliminary blank leaf repaired, small marginal repair to f. 1, blank f. 70 partly cut away, stains and dirt, rear cover of binding extensively repaired, a few other repairs to binding, overall in very good intact condition. Full description and images available. (TM 1026)

spine
The outer portion of a book which covers the actual binding. The spine usually faces outward when a book is placed on a shelf....[more]
Cloth
"Cloth-bound" generally refers to a hardcover book with cloth covering the outside of the book covers. The cloth is stretched...[more]
colophon
The colophon contains information about a book's publisher, the typesetting, printer, and possibly even includes a printer's...[more]
vellum
Vellum is a sheet of specialty prepared skin of lamb, calf, or goat kid used for binding a book or for printing and writing. ...[more]