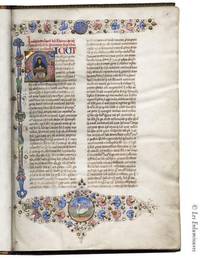 LIBER SUPER ETHICORUM ARISTOTELIS (Commentary on the Ethics of Aristotle);Illuminated manuscript on vellum By Thomas Aquinas

LIBER SUPER ETHICORUM ARISTOTELIS (Commentary on the Ethics of Aristotle);Illuminated manuscript on vellum By Thomas Aquinas

BOOK DESCRIPTION: ELEGANT RENAISSANCE ILLUMINATED MANUSCRIPT IN NEAR PRISTINE CONDITION IN LATIN ON VELLUM, Northeastern Italy (Venice), c. 1470, 340 x 235 mm.,160 folios, complete (collation, i-xii10, xii8, xiii-xvi10, xvii2), written in rounded southern gothic bookhands by three scribes in two columns of forty to thirty-eight lines (justification, 213-205 x 150-148 mm.), the first scribe copied ff. 1-67rb, and ff. 81va, line 27- 82ra, line 19, the second scribe, ff. 67va-81va, line 26, and the third scribe, ff. 82ra, line 19 to the end, red rubrics f. 1 only, red underlining through f. 4v, red and blue paragraph marks and running titles, three-line alternately red and blue initials with very fine violet or red pen decoration, diagram, f. 75v, NINE LARGE ILLUMINATED INITIALS with floral borders, f. 1, HISTORIATED INITIAL WITH THREE-QUARTER BORDER. BINDING: Bound in luxurious nineteenth-century red crushed morocco in the Jansenist style by R. Petit, spine with intricate monogram ("E M B"), elaborately gold-tooled turn-ins and green watered silk doublures, edges gauffered and gilt, front joint a little worn, minor rubbing and scuffs on the front and back covers, but in very good condition. TEXT: Thomas Aquinas (c.1224/1225-1274), the Angelic Doctor, has been called the greatest philosopher between Aristotle and Descartes. He wrote this commentary on Aristotle's Nicomachean Ethics (ed. Opera Omnia vol. 47, 1969) later in his life, c. 1271-2, while writing his great Summa theologica (1265-1273). It follows Aristotle's text closely, providing a detailed explanation, often line by line, discussing the aim of moral philosophy, the definition of what is "good" for man, the virtues, both moral and intellectual, friendship, and the rewards (and limits) of pleasure and happiness. ILLUMINATION: This is an elegant example of a Renaissance manuscript illuminated in Venice by Leonardo Bellini (fl. c. 1443-1490), or a close follower, in a style influenced by Ferrarese illumination. The border decoration (especially the flowers with long stamens) and the animal roundel exhibit many similarities to manuscripts illuminated by Leonardo. The elegant illuminated frontispiece includes an historiated initial of St. Thomas, accompanied by a three-quarter floral border set in black ink trellises, with two painted roundels: the monogram, "YHS," and a white swan. PROVENANCE: The distinctive style of the illumination, script and pen work all support an origin in Venice c. 1470; most likely once belonged to the Dominican Convent of SS. Giovanni e Paolo in Venice; likely belonged to E. M. Bancel in the 19th century; belonged to the Haverhill Public Library, Massachusetts (De Ricci, Census, p. 1062, no. 1). CONDITION, f. 2 is creased with slight loss of legibility in one column (crease also visible on f. 1, text remains legible), f. 1, slightly soiled and with some pigment flaking in the border and initial, small ink smudges, ff. 75, 113, slight stain f. 81, ink on occasional pages abraded (no loss of text), overall in excellent, almost pristine, condition. Full description and photographs available (TM 629).

morocco
Morocco is a style of leather book binding that is usually made with goatskin, as it is durable and easy to dye. (see also...[more]
rubbing
Abrasion or wear to the surface. Usually used in reference to a book's boards or dust-jacket.
soiled
Generally refers to minor discoloration or staining.
fine
A book in fine condition exhibits no flaws. A fine condition book closely approaches As New condition, but may lack the...[more]
vellum
Vellum is a sheet of specialty prepared skin of lamb, calf, or goat kid used for binding a book or for printing and writing. ...[more]
spine
The outer portion of a book which covers the actual binding. The spine usually faces outward when a book is placed on a shelf....[more]
edges
The collective of the top, fore and bottom edges of the text block of the book, being that part of the edges of the pages of a...[more]
gilt
The decorative application of gold or gold coloring to a portion of a book on the spine, edges of the text block, or an inlay in...[more]