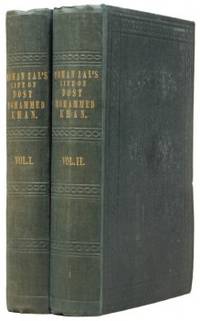 LIFE OF THE AMIR DOST MOHAMMED KHAN OF KABUL. With his Political Proceedings towards the English, Russian, and Persian Governments, including the Victory and Disasters of the British Army in Afghanistan

LIFE OF THE AMIR DOST MOHAMMED KHAN OF KABUL. With his Political Proceedings towards the English, Russian, and Persian Governments, including the Victory and Disasters of the British Army in Afghanistan

Longman, Brown, Green, and Longmans. London. 1846. FIRST EDITION. 2 VOLUMES. 8vo. (9.1 x 6 inches). 19 lithographic portraits, printed on India paper and mounted. Publisher's forest green fine combed cloth, title gilt to spines, blind panelling and central lozenge to the boards, mid-cream surface-paper endpapers. Very slightly rubbed, some off-setting from the plates, but overall a superb set in the original cloth. A remarkably well-preserved set of this highly desirable work. ----- Perhaps the key source for political and diplomatic background to the First Afghan War. Mohan Lal was "Bokhara" Burnes's most important intelligence operative, travelling extensively in Persia and Afghanistan and running a string of agents for the British. In 1841, as the situation in Kabul became critical, Lal tried to warn Burnes of the fact that he was the focus of rising discontent, but the Englishman foolishly believed that he would be able to talk his way out of the situation. Lal escaped the ensuing bloodbath, continuing to supply information from the Afghan capital. In 1844 he visited Scotland to return some papers to the Burnes family, the Montrose Review describing him then in glowing, if condescending, terms; "He is a very handsome man, of 28 years; and, when arrayed in the costly and gorgeous costume of his country, affords a favourable specimen of the Asiatic. But this is the least of his merits: his countenance beams with intelligence, and his intercourse with Europeans has enabled him to adapt himself, with perfect tact, to all their habits and modes of thinking, so that he can sustain with ease and propriety his part in any general conversation. We understand he has been urgently recalled to London â€¦" He remained in London for some time, the present work being written there and dedicated with permission to Queen Victoria, but he never received the recognition from the British government that he felt he deserved. As a result of his service in Muslim countries, he had been excommunicated by the Kashmiri Pandit community, eventually converting to Islam, he died an isolated and embittered man in Delhi in 1877.

(GB)
Bookseller Inventory #
9002
Title
LIFE OF THE AMIR DOST MOHAMMED KHAN OF KABUL. With his Political Proceedings towards the English, Russian, and Persian Governments, including the Victory and Disasters of the British Army in Afghanistan
Author
LAL. MOHAN
Book condition
Used
Binding
Hardcover
Publisher
Longman, Brown, Green, and Longmans. London. 1846
Bookseller catalogs
Travel and Exploration;
Note
May be a multi-volume set and require additional postage.

All books fully guaranteed. Any book found not ot be as described may be returned for a full refund within seven days of receipt. Please notify before returning any books. All items remain the property of Paul Foster Books until paid for in full. Payment by instalment acceptable for high value items. Please ask. ----- Full Member of the Antiquarian Booksellers Association, I.L.A.B, and PBFA

Book room open strictly by appointment only. Established in 1990.

First Edition
In book collecting, the first edition is the earliest published form of a book. A book may have more than one first edition in...[more]
Cloth
"Cloth-bound" generally refers to a hardcover book with cloth covering the outside of the book covers. The cloth is stretched...[more]
fine
A book in fine condition exhibits no flaws. A fine condition book closely approaches As New condition, but may lack the...[more]
gilt
The decorative application of gold or gold coloring to a portion of a book on the spine, edges of the text block, or an inlay in...[more]