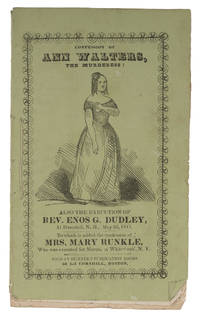 Life and Confession of Ann Walters, The Female Murderess!..

Life and Confession of Ann Walters, The Female Murderess!..

1850. [Boston]: Printed for the Proprietor, 1850.. [Boston]: Printed for the Proprietor, 1850. "The Female Murderess!": Driven by the Culture of Slavery (Two Full-Page Woodcut Illustrations) [Murder]. [Walters, Ann Smith (1812-1844)]. [Dudley, Enos G. (d.1849)]. [Runkle, Mary]. Life and Confession of Ann Walters, The Female Murderess! Also the Execution of Enos G. Dudley, At Haverhill, N.H., May 23d, 1849. To Which is Added the Confession of Mary Runkle, Who Was Executed for Murder. [Boston]: Printed for the Proprietor, 1850. 32 pp. Two full-page woodcut illustrations. Octavo (8-1/2" x 5-1/2"). Stab-stitched pamphlet in green printed wrappers, large woodcut image of Walters to front, untrimmed edges. Light soiling to exterior, moderate edgewear. Light toning to text, somewhat heavier in a few places. $950. * Although OCLC records an "Ann Walters (1812-1844)," McDade believes her story is a work of fiction that incorporates details of a dozen different murders. He also doubts the veracity of the Runkle case. Walters ran a tavern on the Delaware-Maryland border, where she liked to murder traveling slave traders and steal their slaves, money and other valuables. (Her murder of a slave-trader is depicted in one of the woodcuts.) Her depravity is blamed in part on the morally corrosive effects of slavery: "Although born in a free country where slavery is abhorred [Canada], she soon imbibed a taste for the traffic in slaves, as our readers may easily perceive that her location was in a slave state where morality is not very exalted, as such a course could not have been carried on in a free state so long, without meeting the eye of detection." Walters began her career by killing her child and husband, she then became the leader of a criminal gang. OCLC locates 4 copies in law libraries. (Harvard, Social Law, University of Missouri, Yale). McDade, The Annals of Murder 1036.

edges
The collective of the top, fore and bottom edges of the text block of the book, being that part of the edges of the pages of a... [More]
G
Good describes the average used and worn book that has all pages or leaves present. Any defects must be noted. (as defined... [More]
octavo
Another of the terms referring to page or book size, octavo refers to a standard printer's sheet folded four times, producing... [More]
wrappers
The paper covering on the outside of a paperback.  Also see the entry for pictorial wraps, color illustrated coverings for... [More]