Home Raptis Rare Books The Life of His Royal Highness the Prince Consort. With Portraits and Views. 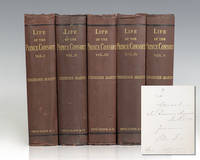 The Life of His Royal Highness the Prince Consort. With Portraits and Views.

The Life of His Royal Highness the Prince Consort. With Portraits and Views.

London: Smith, Elder, & Co, 1875-1880. Complete set of Martin's extensive biography of Prince Albert, contracted and edited by Queen Victoria, each volume inscribed by her. Octavo, five volumes, original cloth with gilt titles to the spine, stamped ruling to the panels, tissue-guarded engraved frontispiece to each volume, illustrated with 8 additional tissue-guarded plates of portraits and views; one a folding facsimile of a draft memorandum by Prince Albert to Lord Lyons in 1861. Association copies, each volume is inscribed by Queen Victoria on the front free endpaper to Sir Francis Seymour. Volume I is inscribed, "To Sir Francis Seymour Bart. In recollection of his dear Mother from Victoria Windsor Castle Dec. 14, 1874." Volume II is inscribed, "To Lieutenant General Sir Francis Seymour Bart. from Victoria Nov. 22, 1876." Volume III is inscribed, "To General Sir Francis Seymour Bart. from Victoria R December 1877." Volumes IV and V are similarly inscribed. The recipient, Sir Francis Seymour, 1st Baronet, was a British Army officer and courtier. His son, Albert Victor Francis Seymour, who was born when Seymour was 74 years old served as a Page of Honour to Queen Victoria. In very good condition. Mixed editions as often: vols. I, IV, and V are first editions, vol. II is a second edition, and vol. III is a fifth edition. Rare and desirable with all five volumes inscribed. This extensive biography of Prince Albert (1819-1861) was begun in 1866 and was originally intended to be a continuation of the unpublished work The Early Years of the Prince Consort by Queen Victoria's private secretary Charles Grey. The queen interviewed Martin on 14 November 1866 and, finding him "very pleasing, clever, quiet, and sympathetic", engaged him to write the biography. Queen Victoria selected the documents for use and intervened widely in the manuscript. Martin "became one of the queen's confidential, if unofficial, servants" (ODNB).

gilt
The decorative application of gold or gold coloring to a portion of a book on the spine, edges of the text block, or an inlay in... [More]
Cloth
"Cloth-bound" generally refers to a hardcover book with cloth covering the outside of the book covers. The cloth is stretched... [More]
inscribed
When a book is described as being inscribed, it indicates that a short note written by the author or a previous owner has... [More]
octavo
Another of the terms referring to page or book size, octavo refers to a standard printer's sheet folded four times, producing... [More]
spine
The outer portion of a book which covers the actual binding. The spine usually faces outward when a book is placed on a shelf.... [More]
facsimile
An exact copy of an original work. In books, it refers to a copy or reproduction, as accurate as possible, of an original... [More]