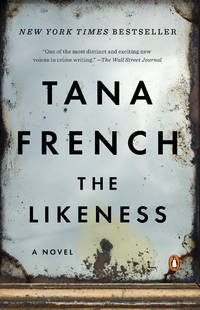 20 Copies Available from This Seller

The haunting follow up to the Edgar Award-winning debut In the Woods Tana French astonished critics and readers alike with her mesmerizing debut novel, In the Woods . Now both French and Detective Cassie Maddox return to unravel a case even more sinister and enigmatic than the first. Six months after the events of In the Woods , an urgent telephone call beckons Cassie to a grisly crime scene. The victim looks exactly like Cassie and carries ID identifying herself as Alexandra Madison, an alias Cassie once used. Suddenly, Cassie must discover not only who killed this girl, but, more importantly, who is this girl? A disturbing tale of shifting identities, The Likeness firmly establishes Tana French as an important voice in suspense fiction. And look for French's new mystery, Broken Harbor, for more of the Dublin Murder Squad. The "expertly rendered, gripping new novel" (Janet Maslin, The New York Times )-from the bestselling author of In the Woods and The Likeness . Tana French's In the Woods and The Likeness captivated readers by introducing them to her unique, character-driven style and her new mystery, Broken Harbor, is eagerly anticipated. Her singular skill at creating richly drawn, complex worlds makes her novels not mere whodunits but brilliant and satisfying novels about memory, identity, loss, and what defines us as humans. With Faithful Place , the highly praised third novel about the Dublin Murder squad, French takes readers into the mind of Frank Mackey, the hotheaded mastermind of The Likeness , as he wrestles with his own past and the family, the lover, and the neighborhood he thought he'd left behind for good.

Books are shipped twice a week, on Tuesdays and Fridays. We accept Visa, Mastercard, Amercian Express, or personal checks and money orders by prior arrangement. If you are unsatisfied with your book because it is defective or not as described, please contact us before sending it back for a full refund.

Seller rating:
This seller has earned a 5 of 5 Stars rating from Biblio customers.
Biblio.com member since: 2006
San Francisco, California
Ask Seller a Question

Located in San Francisco, Borderlands is one of the largest Science Fiction, Fantasy, Supernatural and Mystery specialty bookstores in the country. We carry new and used books, magazines, and British imports. We will special order almost anything. Our cheerful and knowledgeable staff will be happy to help you find the book you are looking for.

trade paperback
Used to indicate any paperback book that is larger than a mass-market paperback and is often more similar in size to a hardcover...[more]
New
A new book is a book previously not circulated to a buyer. Although a new book is typically free of any faults or defects,...[more]
fine
A book in fine condition exhibits no flaws. A fine condition book closely approaches As New condition, but may lack the...[more]