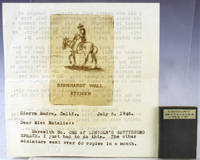 Lincoln's Gettysburg Speech. Together with: two TLs from Bernhardt Wall to Natalie Williams and a copy of the Kingsport Press Addresses of Abraham Lincoln

Lincoln's Gettysburg Speech. Together with: two TLs from Bernhardt Wall to Natalie Williams and a copy of the Kingsport Press Addresses of Abraham Lincoln

Sierra Madre, CA: Bernhardt Wall, 1946. 34pp. Number one of 200 copies, signed by Wall, who etched the entirety of this book, including the text and illustrations, and printed and bound the edition. The book is printed in several colors of ink on a variety of papers and includes numerous illustrations of Lincoln and historical elements around his famous Gettysburg speech. The book is accompanied by two letters from Wall to his close friend Natalie Williams, both bearing color etchings by Wall and in their original envelopes. Lincoln's Gettysburg Speech and Addresses of Abraham Lincoln, published by the Kingsport Press in 1929, are referenced in the letters and were included in the envelopes when they were mailed.

The first letter, 2ff., dated September 25, 1939, discusses Wall's recent marriage (his second) to a widow, Doris Morey. He talks about his reasons for remarrying and how Doris had helped him in his home and work. He gives his thoughts on the progress of his Following Abraham Lincoln series, and, in a handwritten postscript, he mentions that, after MIT had bought his old mill, Dard Hunter had been to visit. He closes the letter by gifting a copy of the Kingsport Press Addresses of Abraham Lincoln to Williams, as he was in the process of dispersing his book collection. The book contains a dated gift inscription from Wall to Williams on the front free endpaper.

The second letter, 1f., is dated July 5, 1946. Wall gifts copy number one of Lincoln's Gettysburg Speech to Williams and talks about it and its predecessor's unexpected popularity. He goes on to chat about Williams' and his families, writing, "And nearly all of your boys are back from the wars. That's something worth being thankful for, eh? Our boy says he's going to be married in August. He has never told us... The G Is are a queer lot. What the war has done to them cannot be described satisfactorily."

Both letters are printed with an etching along with the typewritten text, the first announcing that Wall and his new wife would be at home in Lime Rock, Connecticut after October 1st, and the second acting as a letterhead illustrated with a cowboy on a horse. Aside from fold lines and offsetting on one page from the Kingsport Lincoln, the letters are in fine condition. The two enclosed books are sparkling copies. A fascinating archive from an important miniature book artist. (Lincoln's Gettysburg Address measures 1 7/8 by 1 3/8; 47x35mm. Addresses by Abraham Lincoln measures 7/8 by 5/8; 21x16mm).

G
Good describes the average used and worn book that has all pages or leaves present. Any defects must be noted. (as defined...[more]
New
A new book is a book previously not circulated to a buyer. Although a new book is typically free of any faults or defects,...[more]
fine
A book in fine condition exhibits no flaws. A fine condition book closely approaches As New condition, but may lack the...[more]
miniature
A book that is less then 3 inches in width and ...[more]