Home > BookHolders > The Lion, the Witch and the Wardrobe 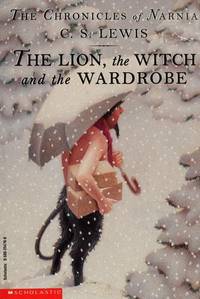 The Lion, the Witch and the Wardrobe

The Lion, the Witch and the Wardrobe

First published in 1950 by Geoffrey Bles in the UK, T he Lion, The Witch, and The Wardrobe is the first published and best known of the C.S. Lewis' popular Narnia series. The American edition was published later in 1950 by Macmillan. Due to labor union laws the type had to be reset so Lewis took the opportunity to make a few changes to the American edition: Edmund and Susan are interested in snakes and foxes instead of foxes and rabbits in chapter 1, the White Witch's chief of police is Fenris Ulf instead of Maugrim in Chapter 6, and the “fire-stones of the Secret Hill” is “the trunk of the World Ash Tree” in chapter 13 of the American Edition. MacMillan first edition, first printing states “First Printing”. In 1994 when HarperCollins took over publication they reverted to the original British printing. The original edition was illustrated by Pauline Baynes, and the British edition had 43 illustrations, while the American lesser. Subsequent American editions had significantly fewer; the most popular edition which was published between 1970 and 1994 by HarperCollins had only 17 severely cropped illustrations. The story came together from a few pieces of inspiration. From the age of 16 onwards Lewis had in his mind an image “a Faun carrying an umbrella and parcels in a snowy wood.” Then in 1939, shortly before WWII, three school girls, Margaret, Mary and Katherine, were evacuated to Lewis' country home to escape the bombing in London, inspiring the characters of Susan, Peter, and Edmund, who go to live with the old professor. He began writing the story that year, and finished in 1949, multiple personal dreams about lions bringing the story together through the character of Aslan. Through his mixture of mythology and talking animals Lewis created the magical world of Narnia that appears to the children as they step through the wardrobe. While writing the first novel Lewis was in a writing group called the Inklings with J.R.R. Tolkien who was working on The Lord of the Rings. Tolkien and Lewis were both professors at Oxford during the 1920s, and Lewis, who was an atheist at the time, was heavily influenced by Tolkien, who was Roman Catholic, so much so he eventually not only converted to Christianity but became known for his devout faith and Apologetic writing – using logic to defend his faith - in such works as Mere Christianity, and The Screwtape Letters. Tolkien was rumored to not have approved of Lewis' Narnia series, reportedly 'horrified' that he mixed so many difference mythologies together and that his world was not a cohesive and consistent imaginary world. Tolkien wasn't alone in his disapproval of Lewis' works. Lewis' publisher, Geoffrey Bles, was concerned the Narnia novels wouldn't sell, and that they would damage Lewis' reputation. Others felt that the stories with their Christian themes were trying to indoctrinate children, and were too fantastical for older children. Today The Lion, The Witch and the Wardrobe is one of the most popular children's books in print, and is included in many top 100 book lists. The Narnia Series is comprised of seven books: The Lion the Witch and the Wardrobe, Prince Caspian, The Voyage of the Dawn Treader, The Silver Chair, The Horse and His Boy, The Magician's Nephew, and The Last Battle. Chronologically The Magician's Nephew is the first book in the series, although The Lion, The Witch, and the Wardrobe was written first. The series wasn't in chronological order until 1956 when a young reader named Laurence suggested it be read that way.   -

Seller rating:
This seller has earned a 3 of 5 Stars rating from Biblio customers.
Biblio.com member since: 2004
College Park, Maryland
Ask Seller a Question

pub
Common abbreviation for 'published'
Poor
A book with significant wear and faults. A poor condition book is still a reading copy with the full text still readable. Any...[more]

Home > BookHolders > The Lion, the Witch and the Wardrobe