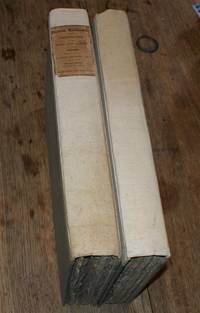 Loidis and Elmete: Or, An Attempt to Describe Districts Described in those Words by Bede etc. Also: Ducatus Leodiensis: or, Topography of the Ancient and Populous Town & Parish of Leedes etc, Musaeum Thoresbyanum

Loidis and Elmete: Or, An Attempt to Describe Districts Described in those Words by Bede etc. Also: Ducatus Leodiensis: or, Topography of the Ancient and Populous Town & Parish of Leedes etc, Musaeum Thoresbyanum

30 day return guarantee, with full refund including shipping costs for up to 30 days after delivery if an item arrives misdescribed or damaged.Returns on all items if decision of return made to seller within 7 days of delivery but any items must be returned unused, ie unread and/or uncopied, with their original packaging and with their inner transparent packaging intact.Delivery rates are quoted for items up to 1kg in weight. Heavier items may incur additional delivery charges.

Seller rating:
This seller has earned a 5 of 5 Stars rating from Biblio customers.
Biblio.com member since: 2010
Doncaster
Ask Seller a Question

rebound
A book in which the pages have been bound into a covering replacing the original covering issued by the publisher.
vignette
A decorative design or illustration placed at the beginning or end of a ...[more]
jacket
Sometimes used as another term for dust jacket, a protective and often decorative wrapper, usually made of paper which wraps...[more]
folio
A folio usually indicates a large book size of 15" in height or larger when used in the context of a book description....[more]
spine
The outer portion of a book which covers the actual binding. The spine usually faces outward when a book is placed on a shelf....[more]
plate
Full page illustration or photograph. Plates are printed separately from the text of the book, and bound in at production. I.e.,...[more]
spine label
The paper or leather descriptive tag attached to the spine of the book, most commonly providing the title and author of the...[more]