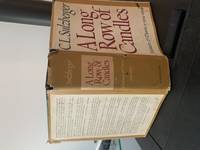 Condition
As New/As New
Seller
Our Literary Cafe
Seller rating:
This seller has earned a 5 of 5 Stars rating from Biblio customers.
Nehalem, Oregon

We ask you why spend your hard earned money and not feel good about how you spend it? This book is offered by Literary Cafe, a small company who believes in recycling good novels and giving historical/valuable works to good homes. The profits we gain supports The Ronald McDonald House, Doernbecher's Children's Hospital, Randall's Children Hospital both in Portland, Oregon, the Shriner's Children Hospital and the Veterans of Foreign Wars.

Condition: As New, dirt smudge on lower outside edges, no apparent markings within this novel. Dust Jacket: As New, intact with no tears.

About this Book: In this very lengthy memoir--the author calls it a product of ""verbal diarrhea""--of twenty years (1934-54) as a roving reporter, C. L. Sulzberger of the New York Times recalls his progress from a hard-drinking young reporter who covered the Pittsburgh morgue to an internationally known foreign correspondent who dined with statesmen and kings. The early sections of the book focus on Sulzberger's years as a cub correspondent in the Balkans. There, he got to know three strange languages and numerous lithe ladies, as well as politicians and participants in palace intrigues; the chapters in which he describes them are marked by colorful and detailed observation of daily life. Later segments, drawn from the author's diaries, record Sulzberger's postwar eminence, when he had access to such luminaries as de Gaulle, Churchill, Tito, Ben Gurion, Nehru, and Ho Chi Minh. These portions shed light on current international problems, notably on the roots of the Arab-Israeli conflict and on the origins of American over involvement in Vietnam. In time he became critical of America's hard-line anti-Communist foreign policy. His viewpoint will be familiar to readers of his syndicated column which has appeared since 1954 on the Times editorial page. But those who regularly struggle with Sulzberger's stiff prose will be agreeably surprised by the genial and often amusing writing here. Though not highly interpretive, this journal will add to the knowledge of readers curious about the crises and stellar personalities of the most frozen Cold War years.

Seller rating:
This seller has earned a 5 of 5 Stars rating from Biblio customers.
Biblio.com member since: 2019
Nehalem, Oregon
Ask Seller a Question

About Our Literary Cafe

Literary Café is a small company who believes in recycling good novels and giving historical/valuable works to good homes. All the profits we receive are evenly distributed to Randall's Children's Hospital, Doerbecher's Children's Hospital (both in Portland, Oregon), Shriner's Children's Hospitals, The Ronald McDonald House and the Veteran's of Foreign Wars (VFW). We ask if your going to spend your hard earned money, why not feel good about it at the same time?

edges
The collective of the top, fore and bottom edges of the text block of the book, being that part of the edges of the pages of a...[more]
New
A new book is a book previously not circulated to a buyer. Although a new book is typically free of any faults or defects,...[more]