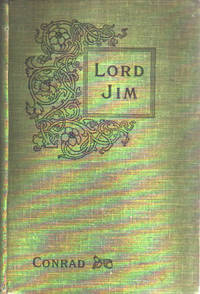 First issue, green cloth, title, author, and publisher in gilt on spine, this was his first major novel and one of his most popular and accessible works, one of 2,105 copies, first issue points: "any rate" is printed as one word on page 77, line 5; "keep" is missing after "can" and "cure" should be "cured" on page 226, seven lines from the bottom; "his" is printed low and not aligned with the other words on page 319, last line, Smith 5, Cagle A5a, Keating 25 and 26, now housed in a custom clamshell case. A very handsome, tight copy, far better than usually encountered.

Joseph Conrad’s Lord Jim follows the events that determine the fate of Jim, a young British seaman. Jim becomes first mate on the Patna, a ship full of pilgrims travelling to Mecca for the hajj. When the ship begins taking in water and disaster is sure to follow, Jim joins his captain and other crewmembers in abandoning the ship and its passengers. The crew is saved by a French ship a few days later and soon learns that the Patna and its passengers were also rescued. The crew’s reprehensible actions are exposed. As a trial ensues, Jim must come to terms with his past. Enter Marlow, sea captain and narrator of Lord Jim as well as three of Conrad’s other works (Heart of Darkness, Youth, and Chance). In spite of Jim’s moral unsoundness, Marlow befriends him during the trial and learns the full story of the Patna, which he relates to the reader. The primary event of Lord Jim may have been based in part on an actual abandonment of a ship. On July 17, 1880, S.S. Jeddah sailed for Penang and Jeddah from Singapore with 778 men, 147 women, and 67 children on board. When the vessel began to leak, the crew abandoned the passengers, who were also travelling to Mecca for the hajj. On August 8, 1880, a French steamship found Jeddah, rescuing all of the pilgrims. An official inquiry followed, as it does in the novel. Lord Jim is ranked 85th on Modern Library’s “100 Best” English-language novels of the 20th century. The novel has been adapted for film twice: Lord Jim (1925), directed by Victor Fleming, and Lord Jim (1965), directed by Richard Brooks and starring Peter O'Toole.

Any item returnable for any reason within 7 days, if prior notice is given and the same item is returned in the same condition as sent. Payment in U.S. dollars only. In general, postage is $4 for the first item and $1 each thereafter. International orders should inquire.

Seller rating:
This seller has earned a 5 of 5 Stars rating from Biblio customers.
Biblio.com member since: 2006
Concord, California
Ask Seller a Question

Open by appointment only

gilt
The decorative application of gold or gold coloring to a portion of a book on the spine, edges of the text block, or an inlay in...[more]
Cloth
"Cloth-bound" generally refers to a hardcover book with cloth covering the outside of the book covers. The cloth is stretched...[more]
spine
The outer portion of a book which covers the actual binding. The spine usually faces outward when a book is placed on a shelf....[more]
tight
Used to mean that the binding of a book has not been overly loosened by frequent use.