Home The Lawbook Exchange Ltd The Magazine of Honour; Or, A Treatise of the Severall Degrees of.. 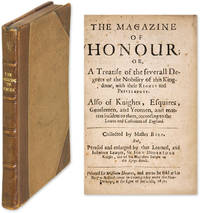 The Magazine of Honour; Or, A Treatise of the Severall Degrees of..

The Magazine of Honour; Or, A Treatise of the Severall Degrees of..

1642. London: Printed for Laurence Chapman, 1642.. London: Printed for Laurence Chapman, 1642. "Nobility of the Realme" Bird, [William]. Doddridge, Sir John [1555-1628]. The Magazine of Honour; Or, A Treatise of the Severall Degrees of the Nobility of this Kingdome, With Their Rights and Priviledges. Also of Knights, Esquires, Gentlemen, And Yeomen, And Matters Incident to Them, According to the Lawes and Customes of England. Collected by Master Bird. But, Perused and Enlarged by That Learned, And Iudicious Lawyer, Sir Iohn Doderidge Knight, One of His Majesties Iudges of the Kings Bench. London: Printed for Laurence Chapman, And William Sheares, 1642. [iv], 56, 65-114, 139-170, 105-158 pp. Text continuous despite pagination. Octavo (6-1/4" x 4"). Later three-quarter morocco over cloth, gilt title and raised bands to spine. Some rubbing to extremities, light soiling and some minor stains to boards, front hinge starting. Moderate toning, occasional light foxing, internally clean. $450. * Only edition. This book, a general handbook on peerage law with original material by Doddridge, was derived from a polemical 1642 essay regarding the legitimacy of Edward Nevill's claim to the title of Lord Bergavenny titled A Treatise of the Nobilitie of the Realme. English Short-Title Catalogue R6100.

morocco
Morocco is a style of leather book binding that is usually made with goatskin, as it is durable and easy to dye. (see also... [More]
gilt
The decorative application of gold or gold coloring to a portion of a book on the spine, edges of the text block, or an inlay in... [More]
rubbing
Abrasion or wear to the surface. Usually used in reference to a book's boards or dust-jacket.
spine
The outer portion of a book which covers the actual binding. The spine usually faces outward when a book is placed on a shelf.... [More]
Cloth
"Cloth-bound" generally refers to a hardcover book with cloth covering the outside of the book covers. The cloth is stretched... [More]
hinge
The portion of the book closest to the spine that allows the book to be opened and closed.
raised band(s)
Raised bands refer to the ridges that protrude slightly from the spine on leather bound books.  The bands are created... [More]
octavo
Another of the terms referring to page or book size, octavo refers to a standard printer's sheet folded four times, producing... [More]