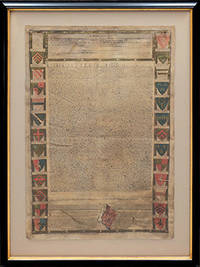 Magna Carta.: By Permission of  the Trustees of the Cottonian Library. This Plate being a Correct Copy of King John's Great Charter

London: John Pine,, 1733. Here is a law which is above the King and which even he must not break". First impression, printed on vellum, of this meticulously engraved facsimile of the Magna Carta, "a sacred text, the nearest approach to an irrepealable "fundamental statute" that England has ever had" (Pollock and Maitland, History of English Law, I, p.173). The work of the John Pine (1690-1756) engraver, publisher, print- and mapseller, Bluemantle Pursuivant at the College of Arms, and Engraver to the King's Signet and Stamp Office, this facsimile was made from one of the Cottonian library copies and heraldically embellished by him with the arms of the rebellious barons. Perhaps the most-celebrated legal document of the English-speaking world, Churchill declaring of it; "Here is a law which is above the King and which even he must not break. This reaffirmation of a supreme law and its expression in a general charter is the great work of Magna Carta; and this alone justifies the respect in which men have held it" (History of the English-speaking Peoples, I, p. 257). Engraved facsimile printed on vellum (700 x 480 mm), central panel of text surrounded by the 25 coats-of-arms of the Barons, hand-coloured, and a similar representation of the remains of King John's Great Seal, all panels enclosed by hand-coloured oak leaf and acorn borders. Professionally framed in Somewhat browned and a little mottled, evidence of light creases from having been at some time folded over twice, pigments a little oxidised and smudged in places as often, small pinholes to the margins as usual, but overall very good. Lowndes 1449-50.

Seller rating:
This seller has earned a 5 of 5 Stars rating from Biblio customers.
Biblio.com member since 2006
London
Ask Seller a Question

vellum
Vellum is a sheet of specialty prepared skin of lamb, calf, or goat kid used for binding a book or for printing and writing. ... [More]
facsimile
An exact copy of an original work. In books, it refers to a copy or reproduction, as accurate as possible, of an original... [More]