Home Between the Covers- Rare Books, Inc. ABAA [Manuscript]: An American Doctor in Japan during the… 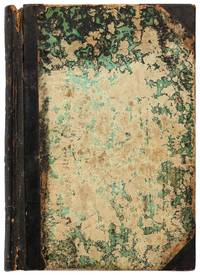 [Manuscript]: An American Doctor in Japan during the 1868 Boshin War: The "Journal of A.M. Vedder, M.D., Physician to His Highness the Prince of Choshui, Mitagiri, Province of Nagato, Japan

[Manuscript]: An American Doctor in Japan during the 1868 Boshin War: The "Journal of A.M. Vedder, M.D., Physician to His Highness the Prince of Choshui, Mitagiri, Province of Nagato, Japan

gilt
The decorative application of gold or gold coloring to a portion of a book on the spine, edges of the text block, or an inlay in...[more]
octavo
Another of the terms referring to page or book size, octavo refers to a standard printer's sheet folded four times, producing...[more]
spine
The outer portion of a book which covers the actual binding. The spine usually faces outward when a book is placed on a shelf....[more]
New
A new book is a book previously not circulated to a buyer. Although a new book is typically free of any faults or defects,...[more]
marbled paper
Decorative colored paper that imitates marble with a veined, mottled, or swirling pattern. Commonly used as the end papers or...[more]
calf
Calf or calf hide is a common form of leather binding.  Calf binding is naturally a light brown but there are ways to treat...[more]
leaves
Very generally, "leaves" refers to the pages of a book, as in the common phrase, "loose-leaf pages." A leaf is a single sheet...[more]
verso
The page bound on the left side of a book, opposite to the recto page.