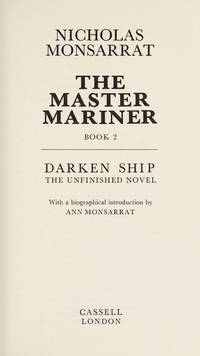 UK,slim 8vo HB+dw/dj,1st edn.[Published posthumously and a sequel to 'Running Proud' completing 'The Master Mariner' saga.] FINE/FINE-. No owner inscrptn but price-clipped dw/dj.Bright,crisp,clean,glossy laminated,pale blue background with gilt compass face and red+dark blue lettering illustrated upper panel,a b/w author portrait photographic illustrated rear panel of dw/dj; with negligible shelf-wear and creasing to edges and corners - no major nicks or tears present.A couple of tiny closed tears/nicks; one to head of front gutter's edge of spine/ backstrip and the other to the rear,top corner.Some inevitable but light, superficial scoring/indents to both panels of dw/dj - but without affecting boards beneath.Spine/backstrip inevitably sunned/faded - as usual/normal - with author's surname faded from red to white and dark blue letters also slightly lighter.Top edges lightly and sporadically foxed/spotted,fore-edges brighter and cleaner with only one foxing spot;contents otherwise bright,tight,clean - pristine - no dog-ear reading creases to any pages' corners,would appear unread apart from my own collation.Bright,crisp,clean,sharp-cornered,publisher's original,plain black cloth boards with bright,crisp,stamped gilt letters to spine/backstrip and immaculate plain white endpapers.UK,8vo HB+ dw/dj,1st edn,3-181pp [paginated] includes a biographical introduction by Ann Monsarrat (author's wife),Darken Ship 1808,envoi: continued story of Matthew Lawe,7 other chapters; plus b/w maps+illustrations by Peter McClure interspersed throughout the text and the book.Plus [unpaginated] half-title+title pages,facsimile manuscript extract, contents list/table,chapter separator pages and 2pp blanks at rear. Described hard,but fairly and honestly - probably too detailed - but still an exceptional example in a particularly good grade as this.See my book ID rja691417 for UK,8vo HB+dw/dj,Author SIGNED,1st edn of first book of two of this story: 'THE MASTER MARINER - Book 1 Running Proud.'
The first volume of 'The Master Mariner - Running Proud' - was Monsarrat's finest novel since 'The Cruel Sea'.Sadly,before his death in 1979 he had written in full only one further episode of Matthew Lawe's odyssey - the compelling account of his command of an illegal slave ship - but there remained the author's extensive and colourful outlines of the further journeyings of his hero,which brought him up to modern times and ended Matthew's four hundred years of suffering. With these it has been possible to round off this great story,which encompasses the whole sweep of maritime development from 1588 to 1978.How 'The Master Mariner' was conceived and written is described by Ann Monsarrat in her Introduction.
The story of Matthew Lawe,the Devon youth who sailed with Drake against the Spanish fleet and, after a spectacular act of cowardice,was condemned by a witch to roam the waters till all the seas ran dry, caught the public imagination and readers followed eagerly as he sailed with Hudson in search of the North-West Passage,became a pirate,took part with Captain Cook in Wolfe's victory on the Heights of Abraham,and worked ashore with Samuel Pepys.But at Trafalgar, despite his love for his captain,Lawe deserted him at the height of the battle and Nelson fell mortally wounded on the deck of HMS Victory.
At the start of 'Darken Ship',only three years later,the penniless Matthew reluctantly accepts command of a slaver working the infamous 'Round Trip': from Liverpool with cheap cotton goods,sold on the west African coast; out to the Caribbean with slaves packed like spoons in a wedding chest; back to Liverpool with sugar,rum and tobacco,and a good fat profit at the end.It is a savage story of squalor and human degradation,leading to mass murder as the slaves are thrown overboard,still chained together,to outwit the naval patrols.Although Matthew enjoys the civilised pleasures of Barbados he is sickened by the ever increasing bestialities of the trade and,rich at last,rebels,only to find himself once more in the Liverpool gutters.
He is press-ganged aboard the frigate 'Shannon' just before her duel with the American 'Chesapeake' in 1813,sails on a clipper ship; searches for the remains of the explorer,Sir John Franklin,in the Arctic; meets Conrad and Galsworthy.In wartime he fights for his country; in peace he is neglected.Matthew's final test comes when fire breaks out on a bulk oil-carrier traversing the St Lawrence Seaway,and he hears again the voice of a man on Drake's fire-ship snarling down the centuries: 'Matthew! Do you want to live forever?'
Please contact seller A rpaxtonden@blueyonder.co.uk ,because of the lighter weight of this item,for correct shipping/P+p quotes - particularly ALL overseas buyers - BEFORE ordering through the order page!
** N.B. US customers please be aware: US standard AIR postage from UK to US can now cost more than the price of the book! If speed is not of the essence,then Economy rate is recommended - at approx. 1/2 to 2/3rds of standard US AIR quote/rate - sometimes arriving long before the quoted 42 days - but not always.