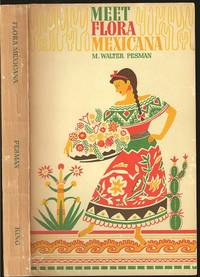 Meet Flora Mexicana: An Easy Way to Recognize Some of the More Frequently met Plants of Mexico as See from the Main Highways

Meet Flora Mexicana: An Easy Way to Recognize Some of the More Frequently met Plants of Mexico as See from the Main Highways

280 pages with foldout map, drawings, photographs, bibliography and index. Octavo (9" x 5 1/2") bound in original publishers pictorial wrappers. From the library of George Foster. First edition. M. Walter Pesman was considered important in the development of Colorado in the 20th Century, being one of the 149 professionals whose biographies appear in "Shaping the American Landscape". In addition to his other activities, he was an amateur botanist. In his first book on native flora of Colorado, "Meet the Natives", he developed an innovative idea of grouping by flower colors in each of the five life zones, and in each season of blooming. It was first published in 1942. The book was willed to the Denver Botanic Gardens and is now in a 2012 edition. His second book on the native flora of Mexico, "Meet Flora Mexicana", was published in 1961. He used the same innovative techniques for plant identification as he did in the first book. He was given an honorary membership in the Sociedad Botanica del Estado de Jalisco during his research on this book. In 1958, at the fifteenth International Horticultural Conference in Nice, France, he presented a paper and gave out packets of Colorado's native plant, the columbine, to attendees. George McClelland Foster, Jr born in Sioux Falls, South Dakota, on October 9, 1913, died on May 18, 2006, at his home in the hills above the campus of the University of California, Berkeley, where he served as a professor from 1953 to his retirement in 1979, when he became professor emeritus. His contributions to anthropological theory and practice still challenge us; in more than 300 publications, his writings encompass a wide diversity of topics, including acculturation, long-term fieldwork, peasant economies, pottery making, public health, social structure, symbolic systems, technological change, theories of illness and wellness, humoral medicine in Latin America, and worldview. The quantity, quality, and long-term value of his scholarly work led to his election to the National Academy of Sciences in 1976. Virtually all of his major publications have been reprinted and/or translated. Condition: Slightly cocked, edge wear, spine darkened, some small chips to cover else a good to very good.

octavo
Another of the terms referring to page or book size, octavo refers to a standard printer's sheet folded four times, producing...[more]
cocked
Refers to a state where the spine of a book is lightly "twisted" in such a way that the front and rear boards of a book do not...[more]
wrappers
The paper covering on the outside of a paperback.  Also see the entry for pictorial wraps, color illustrated coverings for...[more]
First Edition
In book collecting, the first edition is the earliest published form of a book. A book may have more than one first edition in...[more]
spine
The outer portion of a book which covers the actual binding. The spine usually faces outward when a book is placed on a shelf....[more]