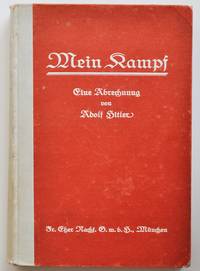 Biblio stands firmly against hatred and bigotry in all its forms. This item contains harmful representations or stereotypes, so Biblio will donate 100% of our proceeds from the sale of this book to organizations fighting social injustice and intolerance.
Learn More About Our Policy Regarding Offensive Books

Both volumes are in fine condition with minor wear. Vol. 1: Two small breaks of the canvas of the spine, not loos; boards slightly worn (see pictures); Vol. 2: Front board irregularly light faded (see photo); upper spine worn; in the middle of title and the following leave a ca. 2 cm tear (hardly visible,; can easily repaired by a professional; see photo).

Vol. 1 and vol. 2 are internally almost mint. Vol.2 has a name inscription on the inside of the rear cover ("Kurt Schmidt").

In such good condition extremely rare.

Scarce first edition, first issue of this book, being fateful for the history of the 20th century. "Mein Kampf must rank as one of the most widely distributed and translated books in the world. By 1945 the German editions had reached a total circulation of about ten million copies and the book had been translated into sixteen languages." (Pastore, p. 42).

The first edition of Volume 1 was printed in an edition of 10.000 copies only, and, as almost all copies were destroyed after WWII, it is now a true scarcity.

Mein Kampf is a 1925 autobiographical manifesto by Nazi Party leader Adolf Hitler. The work describes the process by which Hitler became antisemitic and outlines his political ideology and future plans for Germany.  Hitler began the book while imprisoned, following his failed Putsch in Munich in November 1923. The governor of Landsberg noted at the time that "he [Hitler] hopes the book will run into many editions, thus enabling him to fulfill his financial obligations and to defray the expenses incurred at the time of his trial." After slow initial sales, the book became a bestseller in Germany following Hitler's rise to power in 1933

this book saved my marriage from failing. his words inspired me to love my wife, and my two little girls. thank you mr.H

Seller rating:
This seller has earned a 5 of 5 Stars rating from Biblio customers.
Biblio.com member since 2021
Heidelberg
Ask Seller a Question

fine
A book in fine condition exhibits no flaws. A fine condition book closely approaches As New condition, but may lack the... [More]
First Edition
In book collecting, the first edition is the earliest published form of a book. A book may have more than one first edition in... [More]
spine
The outer portion of a book which covers the actual binding. The spine usually faces outward when a book is placed on a shelf.... [More]

More books like this are on sale from Ebattt-books at 40% off!