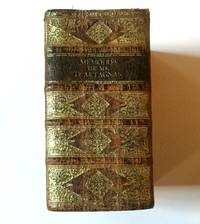 "Alexandre Dumas profitably used the work written by Courtilz de Sandras for his novel entitled 'The Three Musketeers'. The names of Athos, Porthos and Aramis, those very colourful names are written in full; duals, D'Artagnan's affairs and his adventures with Milady are indeed really related." (Quérard)

"We must see in the 'Memoirs de M. D'Artagnan' a prefiguration of the realistic novel, since Sandras only gave to them this appearance of historical truth in order to better captivate his readers. In the foreword the author claims he drew the material from D'Artagnan's papers. " (Dictionnaire des Auteurs, I, 699)

"Three writers of very unequal value collaborated to the 'Three Musketeers': Gatien de Courtilz for the scenario and the plot; Maquet for the rough writing, the draft and in a certain way the model; Alexandre Dumas for the animation of the account and the dialogues, the colour, the style and its life." (Henri d'Alméras)

Gatien de Courtilz sieur de Sandras (1644-1712) was a popular writer who had a tumultuous life owing to his polemist writings. He attacked the French politics and "the audacity of his words sent him for twelve years at the Bastille" (Quérard). He presents in his writings a colorful painting of the end of the century, rich in anecdotes, scandals and saucy details. The author wrote this work at the Bastille where he would have met D'Artagnan, and where the censored and confiscated books were placed in his "hell", which would become "the most beautiful book collection, carefully listed, of the forbidden works in the Kingdom" p. 201 (Portier des Chartreux, les Provinciales de Pascal).

Reissued many times despite confiscations and bans, this text embellishes the real life of Charles de Batz-Castelmore, comte d'Artagnan(1611-1673), cadet d'Armagnac who came to Paris seeking for fortune in 1640, and who became a musketeer and who offered his services to Mazarin.
Courtilz de Sandras would have drawn his inspiration from papers left by Charles de Batz after his death at the siege of Maastricht. He gives a good deal of feats of arms and intrigues of the Court, including the arrest of Foucquet which was executed by D'Artagnan.

Since the present text was quickly reissued, the majority of the copies of this first edition are made of parts from the various successive issues, dated 1700, 1701 or 1702. The present copy is composed of a first part from 1700 and of the two following ones from 1701. It is really the first edition of this text.

A beautiful copy of this rare literary original edition, preserved in its contemporary finely decorated binding.

Seller rating:
This seller has earned a 1 of 5 Stars rating from Biblio customers.
Biblio.com member since: 2018
Paris
Ask Seller a Question

We specialises in Symbolism and History. Showroom in the center of Paris. Please contact us regarding that.

morocco
Morocco is a style of leather book binding that is usually made with goatskin, as it is durable and easy to dye. (see also...[more]
First Edition
In book collecting, the first edition is the earliest published form of a book. A book may have more than one first edition in...[more]
calf
Calf or calf hide is a common form of leather binding.  Calf binding is naturally a light brown but there are ways to treat...[more]
12mo
A duodecimo is a book approximately 7 by 4.5 inches in size, or similar in size to a contemporary mass market paperback....[more]
gilt
The decorative application of gold or gold coloring to a portion of a book on the spine, edges of the text block, or an inlay in...[more]
spine
The outer portion of a book which covers the actual binding. The spine usually faces outward when a book is placed on a shelf....[more]
edges
The collective of the top, fore and bottom edges of the text block of the book, being that part of the edges of the pages of a...[more]