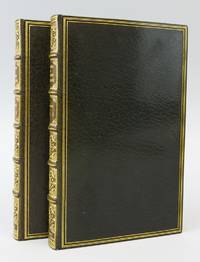 London: Richard Bentley, 1838. FIRST EDITION, Second State (with frame around final plate, "The Last Song"). 204 x 125 mm. (8 x 4 7/8"). With half titles and with 36 pp. of ads at the end of Vol. II. Two volumes. HANDSOME FOREST GREEN CRUSHED MOROCCO, GILT, BY RIVIERE & SON (stamp-signed on front turn-in), covers with French fillet borders, raised bands, spines gilt in delicately tooled compartments with scrolling centerpiece within a lozenge of small tools, volute cornerpieces, gilt titling, turn-ins densely gilt with floral rolls and plain and decorative rules, purple endpapers, top edges gilt, other edges untrimmed. Original purple cloth binding bound in. With 13 plates by George Cruikshank. Eckel, pp. 140-42; Kitton, pp. 177-83; Gimbel Collection B-64. Spines evenly sunned to tan (as usual with green morocco), faint offsetting from final plate, otherwise A VERY FINE COPY, with only the most trivial imperfections internally, and in a sparkling binding. This is an extraordinarily attractive copy of the biography of Joseph Grimaldi (1779-1837), called by Britannica "the most celebrated of English clowns," and generally considered without equal as a clown of pantomime. There has been much debate about the exact nature of Dickens' role in the writing of this book. Forster said that Dickens wrote only the introductory chapter; others have said that he edited the manuscript, with the help of his father; and Bentley has stated in print that Dickens wrote a significant portion of the work. Eckel says, "It is plain that the last chapter is in Dickens' style and that other parts of the book are his. Grimaldi laid the foundation for his memoirs, but in a rough and diffuse manner. He gave the manuscript to Thomas Egerton Wilks, who, after some condensing, sold the manuscript to Bentley, who, in turn, passed it to Dickens for the purpose of embroidery." According to Kitton, copies with the frame around the final plate (as here) are more valuable than others because of their relative scarcity; the border was added without Dickens' consent, and when he expressed his displeasure, it was quickly removed. The especially pretty Riviere binding is typical of the firm's first-rate work and use of the best materials.

First Edition
In book collecting, the first edition is the earliest published form of a book. A book may have more than one first edition in...[more]
edges
The collective of the top, fore and bottom edges of the text block of the book, being that part of the edges of the pages of a...[more]
Cloth
"Cloth-bound" generally refers to a hardcover book with cloth covering the outside of the book covers. The cloth is stretched...[more]
fine
A book in fine condition exhibits no flaws. A fine condition book closely approaches As New condition, but may lack the...[more]
gilt
The decorative application of gold or gold coloring to a portion of a book on the spine, edges of the text block, or an inlay in...[more]
morocco
Morocco is a style of leather book binding that is usually made with goatskin, as it is durable and easy to dye. (see also...[more]
sunned
Damage done to a book cover or dust jacket caused by exposure to direct sunlight.  Very strong fluorescent light can cause...[more]
plate
Full page illustration or photograph. Plates are printed separately from the text of the book, and bound in at production. I.e.,...[more]
second state
used in book collecting to refer to a first edition, but after some change has been made in the printing, such as a correction,...[more]
raised band(s)
Raised bands refer to the ridges that protrude slightly from the spine on leather bound books.  The bands are created...[more]