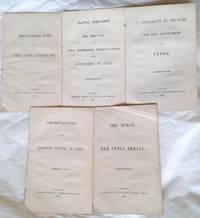 [MILL,John Stuart] Memorandum of the Improvements in the Administration of India during the last thirty years. London, 1858

First separate edition. Of this Memorandum Mill wrote in his manuscript of the bibliography of his writings of this I was partly the author and partly the editor, the facts being furnished by the departments of the India House.

It was published in Parliamentary Papers, 1857-58, XLIII, 1-38. (see above in folio). There was also a separate printing containing the correspondence between the directors of the East India Co and the government and their Petition to Parliament.

MacMnn: "A review of the improvements in legislation, education, religion, roads, and other matters achieved under the supervision of the East India Company".

together with five pamphlets in one volume

Octavo, pp.10, bound with four others.

First edition. "An argument that all government except that by a single man is double government and that the proposed abolition of the East India Company was a long step toward totalitarian government" MacMinn

[MILL,John Stuart] Practical Observations on the First Two of the Proposed Resolution on the Government of India. London, William Penny 1858

First edition. "An exposition of the fact that the government of India has always been controlled by Parliament, that the East India Company has had charge of administration only, and that such a system provides better government for India than is provided by the proposed resolutions". MacMinn

Very rare, 1 copy only in NUC at University of Illinois. MacMinn p.91.

First edition. "An exposition of the view that the power of the Indian Minister should be effectively checked by a council because of the fact that experience is requisite to intelligent dealing with Indian affairs." MacMinn

First edition "An argument that the Indian Minister should be required to present all important measures to a council and abide by the advice of the council". MacMinn

First edition. Discusses the composition of the proposed Council and the plans of the leaders of the three sections in Parliament and stresses the need to have a very strong Council because of the impermanent nature of the Minister.

"In 1856 I was promoted to the rank of chief of the office in which I had served for upwards of 33 years. The appointment, that of Examiner of India Correspondence, was the highest, next to that of Secretary, in the East India Company's home service, involving the general superintendence of all the correspondence with the Indian Governments, except the military, naval, and financial. I held this office as long as it continued to exist, being a little more than two years; after which it pleased Parliament, in other words Lord Palmerston, to put an end to the East India Company as a branch of the Government of India under the Crown, and convert the administration of that country into a thing to be scrambled for by the second and third class of English parliamentary politicians. I was the chief manager of the resistance which the Company made to their own political extinction, and to the letters and petitions I wrote for them..." J.S.Mill, An Autobiography, pp.248-250.

Obituary: Book dealer Hamish Riley-Smith (1941-2020), as published in The Antique Trade Gazette
Rare book specialist Hamish Riley-Smith, who died on August 10, did not originally intend to become a dealer.
He went to Trinity College Dublin, where he read economics and met our mother Brigitta (Gita) von Wagner. He planned to work in the family brewing business, John Smith's, and spent seven years learning the craft at Whitbread's. But after all the family interest in John Smith's was sold in 1972, he looked for a new career.
In 1974 he started Hamish Riley-Smith Rare Books. He had no formal training in the book business, other than an acute awareness of business and a degree in economics. He started, in his own words, as a runner, taking one book to another dealer and making a small margin.
Hamish quickly realised this was not for him and started to focus on Arabic and economic books and the social sciences. Through knowledge and research he built up a strong and friendly working relationship with the Japanese, travelling to Japan often. He also traded in Arabia, the US and Europe.
Sacks of catalogues
We can remember how sacks of catalogues would leave the house and go off to museums and institutions across the world, and answers would come back via telex. This was a world before the internet, mobile phones and faxes and computers were only just coming in.
Among his proudest sales were the 14th century Qur'an manuscript of Mameluk Sultan Al Malik Al Nasir Muhammad (pictured here); The Papers of Sir Roy Harrod; The library of Sir John Hicks; The Betjeman Library; typescript/manuscript of Ludwig Wittgenstein's Tractus Logico Philosophicus; The Felibriges Library of Musée Theodore Aubanel, Avignon; as well as collections of Isaac Newton; John Locke; Thomas Hobbes; Shakespeare; William Petty; Robert Owen and Adam Smith.
He was resolute in his independence and had many friends and colleagues in the book business, but he never did a book fair ("I am not a book fairy") and refused to join any trade associations.
He will be remembered by the family as a loving husband, father and grandfather, and a great source of fun and interest; for Hamish, above all, family came first. His business will continue to be run by his wife Gita and two sons, Damian, director of Paragraph Publishing, and Crispian, director of Crispian Riley-Smith Fine Arts Ltd.

Cloth
"Cloth-bound" generally refers to a hardcover book with cloth covering the outside of the book covers. The cloth is stretched... [More]
octavo
Another of the terms referring to page or book size, octavo refers to a standard printer's sheet folded four times, producing... [More]
gilt
The decorative application of gold or gold coloring to a portion of a book on the spine, edges of the text block, or an inlay in... [More]
spine
The outer portion of a book which covers the actual binding. The spine usually faces outward when a book is placed on a shelf.... [More]