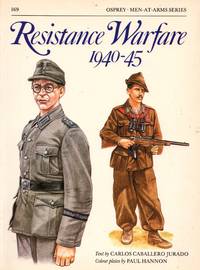 London, UK: Osprey Publishing, 1985. 48 Pages with Black/White Photos and Colour Plates. The occupation of Western Europe by the Wehrmacht brought about the birth of resistance movements in all the countries affected, as well as collaborationist movements directly opposed to the resistance. In effect, the war against Germany became a civil war within each country. Sought out by the Hohere SS und Polizeiführer ('High Command of the SS and Police') and often aided by the British Special Operations Executive, the Western European Resistance centred largely on espionage and intelligence-gathering. A companion volume to Men-at-Arms 142: Partisan Warfare 1941-45, this book explores the history of resistance warfare in Norway, Denmark, Holland, Belgium, France and Italy. . First Edition. Soft Cover. Very Good/No Jacket.

Carlos Caballero Jurado was born in Ciudad Real, Spain, in 1957. He served as an NCO in the Spanish Army's Division Brunete (1st Armoured Division) and later graduated with a BA in History from the University of Alicante. He has written and co-written numerous books and articles on military historical subjects, including four Osprey titles. Carlos is a history teacher in Alicante.