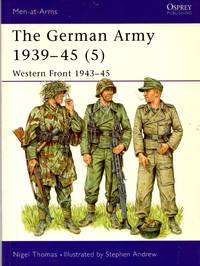 Botley, Oxford, UK: Osprey Publishing, 2000. 48 Pages with Black/White Photos and Colour Plates. This book covers the high command, the developments in unit organisation, the campaigns and the uniforms and equipment of the German Army in the last two years of the war in North-West Europe and Italy. Despite the huge pressure of fighting on three fronts, ever-worsening shortages of manpower and equipment, and Allied command of the skies, Germany's decimated divisions fought on with impressive skill and determination. This period also saw a fascinating mixture of obsolescent, newly designed, and field-made combat clothing which gave the German soldier a radically different appearance from his predecessor of just five years before. Men-at-Arms 311, 316, 326, 330 and 336 are also available in a single volume special edition titled 'German Army in World War II'. . First Edition. Soft Cover. Good/No Jacket.