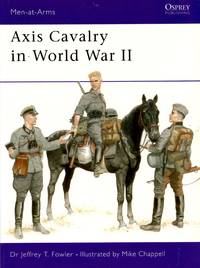 Botley, Oxford, UK: Osprey Publishing, 2001. 48 Pages with Black/White Photos and Colour Plates. It is often forgotten that the German Wehrmacht of 1939-45 relied heavily upon horses. Not only was the majority of Army transport and much of the artillery dependent on draught horse teams; the Germans also kept a horse-mounted cavalry division in the field until the end of 1941. After withdrawing it, they discovered a need to revive and greatly expand their cavalry units in 1943-45. The Army and Waffen-SS cavalry proved their worth on the Russian Front, supported by other Axis cavalry contingents - Romanian, Hungarian, Italian, and locally recruited. In this book an experienced horseman describes that last generation of horse-soldiers in a text supported by tables, photographs, and meticulous colour plates. . First Edition. Soft Cover. Very Good/No Jacket.