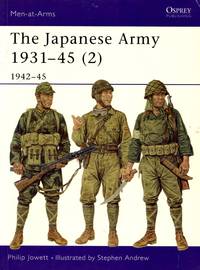 Botley, Oxford, UK: Osprey Publishing, 2004. 48 Pages with Black/White Photos and Colour Plates. Within months of its greatest triumph in 1942, the Japanese Imperial Army began to face the difficulties which would eventually destroy it - overstretched supply lines, and inadequate industrial support. Yet as the Allies grew steadily stronger and more skilful, the Japanese Army and Naval Landing Forces dug in to defend their conquests with a determination which shocked all who fought them. In this second book the author describes the deployments, organisation, uniforms and equipment of the Army - including the dreaded Kempei-tai military police - the naval infantry, paratroopers, special raiding units, and foreign auxiliaries during the long and savage war in Burma and the Pacific. His text is illustrated with many rare photographs, three insignia charts, and eight highly detailed colour plates. . Reprint. Soft Cover. Good/No Jacket.

jacket
Sometimes used as another term for dust jacket, a protective and often decorative wrapper, usually made of paper which wraps...[more]
reprint
Any printing of a book which follows the original edition. By definition, a reprint is not a first edition.