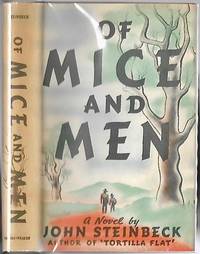 Of Mice and Men [First Issue]

Of Mice and Men [First Issue]

New York: Covici-Friede, 1937. First Edition. Hardcover. Fine/Fine-. First Printing, First Issue, with "and only moved because the heavy hands were pendula," lines 20-21, p. 9, and bullet between the eight's on p. 88, one of only 2500 copies (in subsequent printings, the nine words on p. 9 were removed and the entire page reset) and p. 88 appears without the bullet between between the eight's). Chosen as a Book-of-the-Month Club selection, accounting for the many copies now on the market in clipped "unpriced" dust jackets masquerading as the genuine article. Small 8vo: 186pp. Publisher's beige cloth, spine and upper cover lettered within orange title block between thick black rules, top edge stained blue, pictorial dust jacket printed in black and priced $2.00. A spectacular copy, square, tight, clean, unmarked and probably unread, marred only by fading of blue top-stain (only a few traces of blue remain); about Fine jacket, completely free of tears and edge wear, but spine panel lightly sunned (black lettering and design undiminished). Truly, one for the vaults. Goldstone-Payne A7a. Hanna 3344. Baird 2336. Coan, p. 76. "Of Mice and Men (the title is drawn from Robert Burns's poem "To A Mouse": "The best laid schemes o' mice and men / Gang aft a-gley / An' leave us naught but grief an' pain / For promised joy") marks a deliberate change from Steinbeck's previous work, In Dubious Battle (1936). In this new project, Steinbeck chose to work within a narrower framework . . . concentrat[ing] on a small number of characters as Steinbeck tells the story of migrant ranch laborers in carefully detailed settings. . . . From the very beginning, not only are readers given a call to social reform (the plight of the migrant worker is bleak and unlikely to change), but they also see that such men possess an American dream shared by all levels of society. Even though George and Lennie are different in size, although one is mentally sharp and the other retarded, they both have their dream of ownership and independence." (The Literary Encyclopedia) N. B. With few exceptions (always identified), we only stock books in exceptional condition, with dust jackets carefully preserved in archival, removable polypropylene sleeves. All orders are packaged with care and posted promptly. Satisfaction guaranteed.

Of Mice and Men is a novella written by Nobel Prize-winning author John Steinbeck. Published in 1937, it tells the tragic story of George Milton and Lennie Small, two displaced migrant ranch workers during the Great Depression in California.

This is the greatest, most heartwarming book i have ever read!

jacket
Sometimes used as another term for dust jacket, a protective and often decorative wrapper, usually made of paper which wraps...[more]
tight
Used to mean that the binding of a book has not been overly loosened by frequent use.
sunned
Damage done to a book cover or dust jacket caused by exposure to direct sunlight.  Very strong fluorescent light can cause...[more]
fine
A book in fine condition exhibits no flaws. A fine condition book closely approaches As New condition, but may lack the...[more]
First Edition
In book collecting, the first edition is the earliest published form of a book. A book may have more than one first edition in...[more]
spine
The outer portion of a book which covers the actual binding. The spine usually faces outward when a book is placed on a shelf....[more]
Cloth
"Cloth-bound" generally refers to a hardcover book with cloth covering the outside of the book covers. The cloth is stretched...[more]