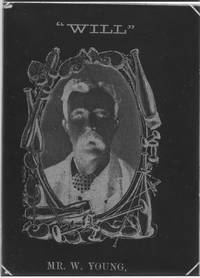 Walsh (a.k.a. Welsh), a Melbourne resident, was born in 1871, debuted in 1892, and fought as a featherweight. He is listed as fighting 49 bouts and 286 rounds. Fred Segar, a resident of Unley, Adelaide, debuted in 1921 as a welterweight. He boxed 21 bouts and 287 rounds, retiring in 1931. His parents are listed as Frederick Segar and Rose Jackson (BoxerRec.com)

The "Barrier Miner" newspaper, (Broken Hill NSW) includes a "Boxing" summary 12 Jan 1922, stating that "'Red' Mitchell arrived by the express this morning. Since boxing Johnny Knowles here he has been engaged in bouts with Fred. Segar and Jonnny Mock... 'Micko' Walsh, a champion featherweight boxer of Victoria, is now in Adelaide. Walsh is suffering from paralysis. (See NLA website)

The image of Will Young, the promoter, is quite self-aggrandizing. Titled "WILL" above and "Mr. W. Young.' below, his portrait is surrounded by decorative border with a boxing glove and training gear motif. The other image is an oval portrait of the two boxers, Walsh and Segar, one seated, the other standing. The date '1921' appears in the border of the image.
Both have paper envelopes, one labeled Will young Promotor (sic) and Micko Walsh & Fred Segar.

Seller rating:
This seller has earned a 4 of 5 Stars rating from Biblio customers.
Biblio.com member since: 2009
Garrison, New York
Ask Seller a Question