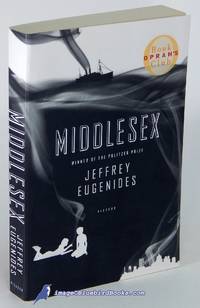 New York: Picador / Farrar, Straus and Giroux. Very Good with no dust jacket. 2002. Softcover. 0312427735 . An excellent paperback copy of the author's popular novel, which was awarded the Pulitzer Prize for Fiction in 2003. The highly-readable story is centered around his appealing young character "Cal/Calliope", growing up in Detroit who happens to be intersex (once known as hermaphrodite). --- In wraps with composite image of youthful figures, a ship, and smoke to cover. --- A clean, unmarked, sound copy but with just a hint of tanning to leaves.; Octavo (8 to 9 in. tall); viii, 529 pages .

Jeffrey Eugenides was born in 1960 in Detroit, Michigan, the son of an American-born father whose Greek parents emigrated from Asia Minor and an American mother of Anglo-Irish descent. After graduating from Brown University and Stanford University, in 1988 Jeffrey Eugenides published his first short story. His first novel, The Virgin Suicides , was published in 1993 to rapturous acclaim. The compelling, tender and wickedly humorous story of the five Lisbon sisters in “the year of the suicides,” told in a voice representing the eclectic group of men who came under their spell, The Virgin Suicides was an immediate off-beat success. It has been translated into fifteen languages and made into a feature film, and its author was named one of America’s best young novelists by both Granta and The New Yorker . Middlesex , his second novel, won the Pulitzer Prize, was shortlisted for the National Book Critics Circle Award, and was hailed as a brilliant, original and joyful book by critics and readers alike. The New York Times Book Review described Middlesex as a “a colossal act of curiosity, of imagination and of love”; Salman Rushdie called it “A wonderfully rich, ambitious novel”; the Los Angeles Times announced that with it, Jeffrey Eugenides “emerged as the great American writer that many of us suspected him of being.” Jeffrey Eugenides’ fiction has appeared in The New Yorker , The Paris Review , The Yale Review , Best American Short Stories , The Gettysburg Review , and Granta . He lives in Berlin, Germany, with his wife and daughter. His forthcoming projects include a book of short stories and a non-fiction guide to Berlin.

All sales sold on a satisfaction guaranteed basis--all we ask is that you notify us within 30 days of purchase that you would like to return an item.

Seller rating:
This seller has earned a 5 of 5 Stars rating from Biblio customers.
Biblio.com member since 2005
Littleton, Colorado
Ask Seller a Question

Bluebird Books is the bookselling business of Eric Mayer, operating from my base in Littleton, Colorado. I specialize in classic fiction and literature, books on birds and natural history, railroadiana, biography, history and many other genres. Bluebird Books features publications by the Modern Library and Everyman's Library. I offer free shipping on books shipped within the US via USPS Media Mail. INTERNATIONAL ORDERS: I recommend that you use Biblio.com for your international orders because they have formed a partnership with Asendia to allow for much more affordable shipping on parcels weighing under 5 lb. (about 2.26 kg).

jacket
Sometimes used as another term for dust jacket, a protective and often decorative wrapper, usually made of paper which wraps... [More]
octavo
Another of the terms referring to page or book size, octavo refers to a standard printer's sheet folded four times, producing... [More]
leaves
Very generally, "leaves" refers to the pages of a book, as in the common phrase, "loose-leaf pages." A leaf is a single sheet... [More]