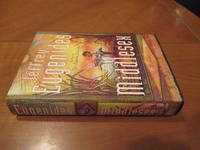 Jeffrey Eugenides was born in 1960 in Detroit, Michigan, the son of an American-born father whose Greek parents emigrated from Asia Minor and an American mother of Anglo-Irish descent. After graduating from Brown University and Stanford University, in 1988 Jeffrey Eugenides published his first short story. His first novel, The Virgin Suicides , was published in 1993 to rapturous acclaim. The compelling, tender and wickedly humorous story of the five Lisbon sisters in “the year of the suicides,” told in a voice representing the eclectic group of men who came under their spell, The Virgin Suicides was an immediate off-beat success. It has been translated into fifteen languages and made into a feature film, and its author was named one of America’s best young novelists by both Granta and The New Yorker . Middlesex , his second novel, won the Pulitzer Prize, was shortlisted for the National Book Critics Circle Award, and was hailed as a brilliant, original and joyful book by critics and readers alike. The New York Times Book Review described Middlesex as a “a colossal act of curiosity, of imagination and of love”; Salman Rushdie called it “A wonderfully rich, ambitious novel”; the Los Angeles Times announced that with it, Jeffrey Eugenides “emerged as the great American writer that many of us suspected him of being.” Jeffrey Eugenides’ fiction has appeared in The New Yorker , The Paris Review , The Yale Review , Best American Short Stories , The Gettysburg Review , and Granta . He lives in Berlin, Germany, with his wife and daughter. His forthcoming projects include a book of short stories and a non-fiction guide to Berlin.

Payment by credit card, check, PayPal or, for orders over $1000m by bank transfer. Shipping by US media mail at average standard rates but large or heavy items may require additional postage. Shipments valued over $200 may be sent with insurance, and/or with signature confirmation, required. International shipments sent only by insured USPS mail (Priority Mail or Priority Express Mail or Express Guaranteed). Shipments to the UK may require additional shipping charges. Sales within California and many other states are now subject to sales tax. International shipments may be subject to Customs duties or fees and/or VAT, which are the responsibility of the buyer. Postage will not be refunded for items returned as package unaccepted; please review your order for correct addressing.

Seller rating:
This seller has earned a 5 of 5 Stars rating from Biblio customers.
Biblio.com member since 2013
Pasadena, California
Ask Seller a Question

Arroyo Seco Books lists about 24,000 used, unusual and scarce books in all fields, including physics, art, philosophy, social science, literature, science fiction, etc. We stock modern and antiquarian prints and other art. Most items are listed in 100 catalogs titled by subject matter on this site. We purchase interesting private libraries. Member of IOBA. Contact: Stephen Clauser, 626-372-3863.

fine
A book in fine condition exhibits no flaws. A fine condition book closely approaches As New condition, but may lack the... [More]
Cloth
"Cloth-bound" generally refers to a hardcover book with cloth covering the outside of the book covers. The cloth is stretched... [More]
jacket
Sometimes used as another term for dust jacket, a protective and often decorative wrapper, usually made of paper which wraps... [More]
spine
The outer portion of a book which covers the actual binding. The spine usually faces outward when a book is placed on a shelf.... [More]