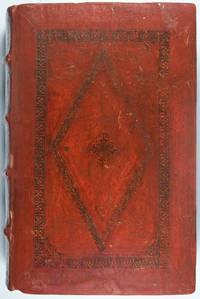 Venice: Daniel Bomberg, 1526. First edition. Hardcover. vg. Folio. (512)ff. Contemporary stamped and tooled calf binding, rebacked retaining the original spine. Deluxe copy with thicker cotton rag paper and wide margins retained at the bottom. Gilt gauffred page edges, raised bands. Collated in sets of 8 leaves, begins with set 56, runs through 119 (thus 512 leaves total). Second volume of Bomberg's second Biblia Rabbinica, known as the first Jewish Rabbinic Bible (Mikraot Gedolot, TaNaKh), based on Jacob ben Chaim's Masoretic codex (see Darlow and Moule #5085). Follows Bomberg's famous layout design- vocalized, cantillized, partially versified Hebrew Biblical text in the center, surrounded on the outside by the classical commentaries of Rashi and extensive Masoretic notes, as well as several other classical commentators. These additional sources include: David Kimchi "RaDaK" (Later Prophets), Ibn Ezra (Later Prophets, Writings), and Saadia ben Yosef Gaon (Daniel). Decorative title pages the beginning of the volume (Later Prophets) and at the beginning of Writings, illustrated with a repeating woodcut engraving depicting a cutaway of a traditional Temple design. Both title pages mention publisher and publishing place written in Rashi script, but no date imprint. End of last Biblical text page contains a complete imprint with date in Hebrew block script (286, or 1526 CE). Book headings engraved with the traditional Bomberg design. Second volume only, begins directly with Isaiah, and continues through the rest of Later Prophets and Writings (the first volume contained the Pentateuch and the Early Prophets- Joshua, Judges, Samuel, and Kings). Writings opens with a short poem and a paragraph by Ibn Ezra. Several appendices at end: first, the Mesorah Gedolah, an extensive alphabetical index of Biblical Hebrew words and their occurrences throughout the TaNaKh. Following appendix contains variances (mostly in cantillation) of the Mesorah (transmitted tradition) on the writing of the TaNaKh. Final appendices are: Kria and Shaar ha-Neginut (variances on public reading customs). Jacob ben Chaim's name appears at the beginning of the introduction to the first appendix. Future reprints of this edition also contain b. Chaim's name here, but will omit it in their frontispieces and prefaces, due to b. Chaim's conversion to Christianity and exile from the Jewish community of Venice, for whom Bomberg produced the Mikraot Gedolot. Unlike later editions, this printing does not contain the Targum Yerushalmi. Biblical text in Hebrew block script, commentaries and appendices in Hebrew Rashi script. Minor worming, scuffing and rubbing to binding. Title-page crudely repaired and mounted on tab, not affecting text. Ex-libris stamp to title page. Overall very clean interior, meticulously sharp and clear lettering of a genuine original Bomberg edition. In near fine condition.

Seller rating:
This seller has earned a 4 of 5 Stars rating from Biblio customers.
Biblio.com member since: 2009
Santa Monica, California
Ask Seller a Question

rubbing
Abrasion or wear to the surface. Usually used in reference to a book's boards or dust-jacket.
fine
A book in fine condition exhibits no flaws. A fine condition book closely approaches As New condition, but may lack the...[more]
calf
Calf or calf hide is a common form of leather binding.  Calf binding is naturally a light brown but there are ways to treat...[more]
VG
Very Good condition can describe a used book that does show some small signs of wear - but no tears - on either binding or...[more]
folio
A folio usually indicates a large book size of 15" in height or larger when used in the context of a book description....[more]
gilt
The decorative application of gold or gold coloring to a portion of a book on the spine, edges of the text block, or an inlay in...[more]
spine
The outer portion of a book which covers the actual binding. The spine usually faces outward when a book is placed on a shelf....[more]
First Edition
In book collecting, the first edition is the earliest published form of a book. A book may have more than one first edition in...[more]
leaves
Very generally, "leaves" refers to the pages of a book, as in the common phrase, "loose-leaf pages." A leaf is a single sheet...[more]
title page
A page at the front of a book which may contain the title of the book, any subtitles, the authors, contributors, editors, the...[more]
raised band(s)
Raised bands refer to the ridges that protrude slightly from the spine on leather bound books.  The bands are created...[more]
edges
The collective of the top, fore and bottom edges of the text block of the book, being that part of the edges of the pages of a...[more]
rebacked
having had the material covering the spine replaced. ...[more]