Home Paul Haynes Rare Books The mission to Siam, and Hue the Capital of Cochin China in the years 1821-2. From the journal of the late… 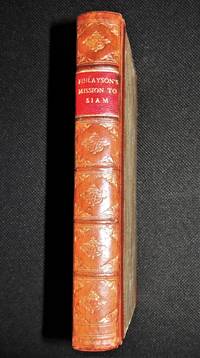 The mission to Siam, and Hue the Capital of Cochin China in the years 1821-2. From the journal of the late George Finlayson, Esq. With a Memoir of the Author by Sir Thomas Stamford Raffles, F.R.S.

The mission to Siam, and Hue the Capital of Cochin China in the years 1821-2. From the journal of the late George Finlayson, Esq. With a Memoir of the Author by Sir Thomas Stamford Raffles, F.R.S.

Provenance: The bookplate of Thomas Philip Earl de Grey at Wrest Park (1781-1859), known as The Lord Grantham from 1786 to 1833, British Tory politician and statesman, holding office as first Lord of the Admiralty till April 1835. First President of RIBA, Earl de Grey was a fellow of the Royal Society, The Royal Geographical Society and the Society of Antiquaries. ODNB

half title
The blank front page which appears just prior to the title page, and typically contains only the title of the book, although, at...[more]
bookplate
Highly sought after by some collectors, a book plate is an inscribed or decorative device that identifies the owner, or former...[more]
gilt
The decorative application of gold or gold coloring to a portion of a book on the spine, edges of the text block, or an inlay in...[more]
spine
The outer portion of a book which covers the actual binding. The spine usually faces outward when a book is placed on a shelf....[more]
calf
Calf or calf hide is a common form of leather binding.  Calf binding is naturally a light brown but there are ways to treat...[more]
Marbled boards
...[more]
crisp
A term often used to indicate a book's new-like condition. Indicates that the hinges are not loosened. A book described as crisp...[more]
shelf wear
Shelf wear (shelfwear) describes damage caused over time to a book by placing and removing a book from a shelf. This damage is...[more]