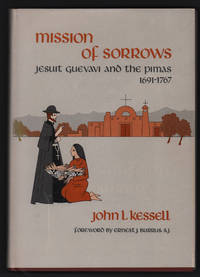 Tucson, AZ: University of Arizona Press, 1970. First Edition. Cloth. Near fine/fine. A near fine first edition in a fine, unclipped dust jacket. Brown cloth boards, front top corner bumped. Gilt title stamping. Mission map end papers. From the private library of Larry Southwick, collector's marginalia pencilled at inner edge of half title. xvi, 224 pp. including index. Quarto, 7 1/4 x 10 1/2 inches tall. The Mission of Guevavi on the Santa Cruz River in what is now southern Arizona served as a focal point of Jesuit missionary endeavor among the Pima Indians on New Spain's far northwestern frontier.For three-quarters of a century, from the first visit by the renowned Eusebio Francisco Kino in 1691 until the Jesuit Expulsion in 1767, the difficult process of replacing one culture with another—the heart of the Spanish mission system—went on at Guevavi. Yet all but the initial years presided over by Father Kino have been forgotten.Drawing upon archival materials in Mexico, Spain, and the United States—including accounts by the missionaries themselves and the surviving pages of the Guevavi record books—Kessell brings to life those forgotten years and forgotten men who struggled to transform a native ranchería into an ordered mission community.Of the eleven Black Robes who resided at Guevavi between 1701 and 1767, only a few are well known to history. Others—such as Joseph Garrucho, who presided more years at Guevavi than any other Padre; Alexandro Rapicani, son of a favorite of Sweden's Queen Christina; Custodio Zimeno, Guevavi's last Jesuit—have the details of their roles filled in here for the first time.In this in-depth study of a single missionary center, Kessell describes in detail the daily round of the Padres in their activities as missionaries, educators, governors, and intercessors among the often-indifferent and occasionally hostile Pimas. He discusses the Pima uprising of 1751 and the events that led up to it, concluding that it actually continued sporadically for some ten years.The growing ferocity of the Apache, the disastrous results of certain government policies—especially the removal of the Sobaípuri Indians from the San Pedro Valley—and the declining native population due to a combination of enforced culture change and epidemics of European diseases are also carefully explored.The story of Guevavi is one of continuing adversity and triumph. It is the story, finally, of expulsion for the Jesuits and, a few short years later, the end of Mission Guevavi at the hands of the Apaches. In Mission of Sorrows Kessell has projected meticulous research into a highly readable narrative to produce an important contribution to the history of the Spanish Borderlands." -- From the Publisher

jacket
Sometimes used as another term for dust jacket, a protective and often decorative wrapper, usually made of paper which wraps...[more]
half title
The blank front page which appears just prior to the title page, and typically contains only the title of the book, although, at...[more]
marginalia
Marginalia, in brief, are notes written in the margins, or beside the text of a book by a previous owner.  This is very...[more]
fine
A book in fine condition exhibits no flaws. A fine condition book closely approaches As New condition, but may lack the...[more]
New
A new book is a book previously not circulated to a buyer. Although a new book is typically free of any faults or defects,...[more]
quarto
The term quarto is used to describe a page or book size. A printed sheet is made with four pages of text on each side, and the...[more]
First Edition
In book collecting, the first edition is the earliest published form of a book. A book may have more than one first edition in...[more]
gilt
The decorative application of gold or gold coloring to a portion of a book on the spine, edges of the text block, or an inlay in...[more]
Cloth
"Cloth-bound" generally refers to a hardcover book with cloth covering the outside of the book covers. The cloth is stretched...[more]