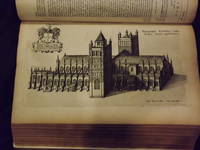 3 volumes, folio, contemporary leather, modern rebacking in leather, new endsheets, illustrated with engraved pre title, some text illustrations and 108 plates many folding, [40], 1151; 3, [14], 2, 1057; [6], 378, 218, [379-392 first index in volume 3] pp. Leather scuffed in places, one plate missing top half, a second possibly missing bottom portion of plate, but image appears complete, another plate upside down, some soiling, foxing and normal aging, a few pages with tears, but not affecting text; overall nice set of a very rare first edition. William Dugdale (1605-1681) was born at the Shustoke rectory to an old Lancashire family, and was educated at the King Henry VIII School in Coventry. As a young man, he showed an inclination for antiquarian studies, and through a relationship with Sir Christopher Hatton was commissioned to make exact drafts of all the churches in England in 1641. After a visit to France in 1648 he continued his antiquarian studies in London, and collaborated with Richard Dodsworth on his Monasticon Anglicanum, which was published in 1655, 1661, and 1673. It has been reported that Dugdale himself sold copies to booksellers who passed them along to a small, but appreciative audience. The work provided a history of the various orders in England, and an account of the individual monasteries. While other major editions of this work were published in 1693, 1718 and 1846, because each volume was published separately, it is very difficult to find a complete set of the first edition. It is difficult to determine the right number of plates for this edition, but it appears this set has 108. The 1718 edition seems to have a larger number of plates. Dugdale's other major works include Antiquaries of Warwichshire (1656) and History of St. Paul's Cathedral (1658). The set includes a letter dated November 30, 1956 from a bookseller acknowledging the sale of the set to a buyer. Extra postage required.

plate
Full page illustration or photograph. Plates are printed separately from the text of the book, and bound in at production. I.e.,...[more]
First Edition
In book collecting, the first edition is the earliest published form of a book. A book may have more than one first edition in...[more]
New
A new book is a book previously not circulated to a buyer. Although a new book is typically free of any faults or defects,...[more]
folio
A folio usually indicates a large book size of 15" in height or larger when used in the context of a book description....[more]