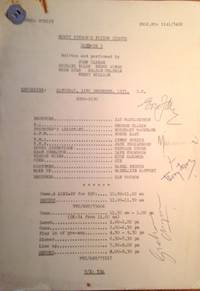 N.p. [London]: N.p. [BBC], 1971-2. Thirteen typed camera scripts, each secured with a split pin to top left. Slight rusting of pins to some episodes, with consequent marking to surrounding paper. Some episodes marked up by studio cameramen on day of recording. The entire third series (of four), comprising nine original, first-state camera typescripts, the remaining four on different paper stock, and possibly of later origin (see below), EPISODE TWO (ONE OF THE FIRST-STATE SCRIPTS) SIGNED ON TITLE PAGE BY CHAPMAN, IDLE, PALIN AND JONES ON DAY OF RECORDING. Series Three of Python ran from 19 October 1972 to 18 January 1973, and comprises thirteen episodes. Tensions were by then growing within the group, and John Cleese, worried that they were beginning to repeat themselves, had to be pressured into staying on. (Cleese had a point: he would play no part in Series Four, and episode 13 of this series marks his last Python appearance). The BBC was getting nervous, too. Many sketches had moved on from the pure silliness of the first two series, and had become much more savage, surreal and, in many cases, downright unpleasant. Editorial interventions from the Corporation became more frequent, increasing tension within the group still further. Despite all this, much classic Python is to found in these scripts: The Cheese Shop and Sam Peckinpah's Salad Days (Ep. 4); Whicker's Island (Ep. 5); and Gumby Brain Specialist (Ep. 6), among many other indelible moments. The Proust Competition sketch of Episode 9 was censored by the BBC: they objected to Chapman's use of the word 'masturbation' and insisted the soundtrack be cut at the (in)appropriate moment. And Episode 13 carries three sketches which were never broadcast at all: Revolting Cocktails, Sculptor and Wee-Wee Wine Cellar. Cleese thought Sculptor under-rehearsed, and Cocktails and Wine Cellar childishly scatalogical. His fellow Pythons agreed with him on the first sketch, the BBC agreed with him on the other two. All three were recorded; all three were cut; all three are now lost. Of these thirteen camera scripts, the provenance of four is unsure. Episodes 1, 4 (which lacks the title page), 6 and 7 are on a different (white) paper stock, and appear to have been photocopied from originals -- the annotations of the camera crews are not pencilled on, but were there when the copy was made. However, all four are secured with split pins to top left (like the other nine), the pins are of the same make and vintage as the other nine, and there is rusting to the pins and browning to the surrounding paper similar to that found on the other nine, suggesting they are of a similar vintage. This becomes more certain with the evidence provided by Episode 11, a yellow script with white, presumably rewritten pages inserted into it. Of the nine first-state scripts, Episodes 2, 3, 5, 8, 9, 12 and 13 all carry camera crew annotations (some more than others); Episodes 10 and 11 are unmarked. Episode 13 is of a different paper stock, and is a deeper yellow, and Episodes 9, 10 and 11 have been subjected to some later nibbling by mice at the leading edge (not affecting text). All are in condition consistent with their age and usage, with some rusting to pins, and light (non-mouse-related) edgewear. From time to time a single Python script will surface. Here is the complete third series, signed by four of its creators, of one of the most influential comedy shows ever made.

Seller rating:
This seller has earned a 5 of 5 Stars rating from Biblio customers.
Biblio.com member since: 2016
London
Ask Seller a Question

We are an online book dealership. Visits to our office by appointment only.

title page
A page at the front of a book which may contain the title of the book, any subtitles, the authors, contributors, editors, the...[more]